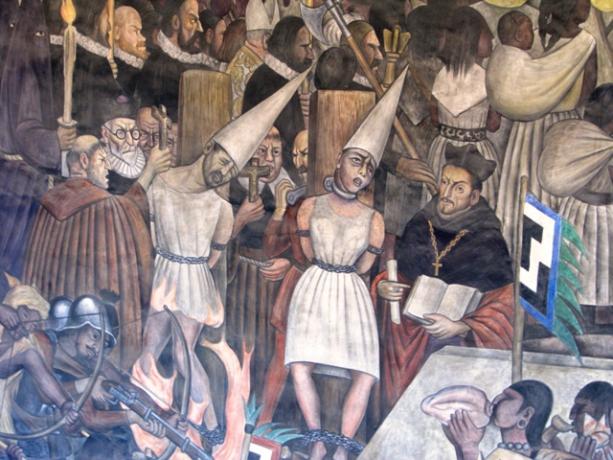 This is a Zoom presentation

Even a cursory glance at modern popular culture reveals the degree to which the Spanish Inquisition continues to shape our historical imaginations. As we laugh at the antics of Monty Python or Mel Brooks, we see the same images: men in red robes preparing the instruments of torture and fanning the flames of the pyre. This new ASM Master Class subjects the Inquisition, as both a European and New World institution, to rigorous examination. We will explore the laws, procedures, and practices that fashioned the Inquisition into a religious, political, and cultural instrument of power that was wielded by the Church but often in support of an expansive State, from its origins in medieval Europe to its transfer to the Spanish colonies to its eventual demise in the early nineteenth century. We also will assess a series of case studies in order to identify what brought people before the Inquisition, including, for example, accusations of conducting Jewish and Muslim practices, idolatry, blasphemy, crimes against the Catholic sacraments, witchcraft and sorcery, as well as the illicit use of flora, fauna, and human matter, and, finally, publishing books and treatises that promoted heresy or political sedition.

Session 1: Introduction – The Inquisition in History and Popular Culture
Our first session introduces the major themes of the Master Class and establishes the conceptual framework for better understanding the Inquisition, trying to separate fact from fiction, history from myth. Issues of historical and cultural relativism will be examined, as well as the broader political concept of ‘inquisition’ and its evolution in modern world history (for example, Senator Joe McCarthy’s hunt for communists in the early Cold War). Finally, we will explore the Spanish Inquisition in popular culture and ask why we might find humor in its procedures. 90 min plus Q&A

Session 2: The Inquisition in Europe – Medieval and Spanish Iterations
We will assess the origins of the Holy Office of the Inquisition in medieval Europe, particularly in light of the so-called heretical movements that emerged in southern France and northern Italy but also as part of institutional efforts to curb ‘mob justice.’ We will focus on the Spanish Inquisition and its links to the union of the Crowns of Castile and Aragón under Isabella and Ferdinand. Spanish attitudes toward the Jewish and Muslim populations in Spain will be part of the discussion, as will conversos (Jews who had converted to Catholicism) and moriscos (Muslims who had converted to Catholicism). 90 min plus Q&A

Session 3: The Inquisition Comes to Colonial Mexico
Despite the lack of Jews, Muslims, and Protestants in Spain’s most prized New World colony, the Inquisition was established in New Spain in 1571, although an inquisition run by the bishops of Mexico City and Yucatán had functioned there since the mid-1530s. We will examine the procedures that defined each step in the inquisitorial process, the legal parameters of using torture, and the grand public spectacles that followed Inquisition trials—what were known as autos-de-fé. 90 min plus Q&A

Session 4: Inquisition Case Studies, Part I – Blasphemy, Crimes against Marriage, and Jewish, Muslim, and Protestant Practices
Employing case studies found in Mexican, Spanish, and U.S. archives and rare book libraries, we will evaluate the different accusations that neighbors leveled against neighbors, family members against other family members, and friends and lovers lodged against each other. These case studies will show us the complex web of social and political relationships that developed in colonial Mexico, where an ever-growing racially-mixed population used the Inquisition to forge local autonomy and wield cultural power. Efforts will be made to employ case studies from throughout the colony. 90 min plus Q&A

Session 5: Inquisition Case Studies, Part II – Witchcraft, Sorcery, Superstition, and Print Culture
Our final session will utilize case studies that reveal other intimate dimensions of the accusations that landed people before the Inquisition, such as the use of love potions, local plants and animals, and bodily fluids to cast spells over potential lovers and enemies, both real and imagined. We also will examine change and continuity in the Mexican Inquisition caseload during the transition to Bourbon rule in the eighteenth century, as the new dynasty moved to reassert royal power in the Age of Enlightenment. Finally, we will assess the manner in which the Inquisition exercised censorship of religious and political tracts, as well as printed expressions of popular culture. The Master Class concludes by looking at the Inquisition’s role during the wars for independence from Spain (1810-1821). 90 min plus Q&A

Image:  Detail, The Court of the Inquisition by Diego Rivera. A mural in the National Palace, Mexico City. 1929-35. Public domain.