The General John A. Logan Collection: Objects from the Founder of Memorial Day

Few may be aware of an interesting connection between Tucson and the man responsible for Memorial Day becoming a national holiday.

In 1868, General John Alexander Logan, Civil War hero, Illinois Senator and Congressman, and leader of the Grand Army of the Republic, authored his Memorial Day Order, "The 30th of May, 1868, is designated for the purpose of strewing with flowers, or otherwise decorating the graves of comrades who died in defense of their country during the late rebellion, and whose bodies now lie in almost every city, village, and hamlet churchyard in the land. In this observance no form or ceremony is prescribed, but posts and comrades will in their own way arrange such fitting services and testimonials of respect as circumstances may permit." This led to the establishment of Memorial Day as a national holiday.

Fast forward to 1942, when Logan's grandson, Tucsonan John A. Logan III, donated a large collection of Plains and Southwestern Indian materials to the Arizona State Museum. The majority of these had been collected by his grandfather, who became a U.S. Senator in 1871 and served on fact-finding commissions as a member of the Indian Affairs Committee. General Logan took a number of trips to the Southwest, on official business as part of his service on the committee, and to visit his daughter Dollie and son-in-law William F. Tucker who lived in New Mexico. Logan had arranged for his son-in-law to be assigned as a quarter master at Ft. Wingate (near Gallup). It is assumed that he purchased or was given the southwestern materials while on one of these visits.

Logan's relationship to Indian people could be considered paradoxical. On one hand, Logan felt that the answer to the "Indian Problem" was Christianity and a White Man's education. He publicly chastised the great Indian leader Sitting Bull for having boycotted a meeting with U.S. Army officials. On the other hand, he spoke passionately against the Indian Affairs Department being transferred to the War Department, on the grounds that the army's history of treatment of the Indians was despicable.

A number of places across America are named in Logan's honor, including Logan's Peak and Ft. Logan in Colorado, a county in Oklahoma, John A. Logan College in Carterville, Illinois, and Logan Circle in Washington, D.C.  There is also an entire museum devoted to him in his birthplace of Murphysboro, in southern Illinois. Two of their major events are the annual General Logan Day Breakfast in February and Logan Days at the Museum in May which celebrate the role of their native son in the founding of this most important patriotic holiday.  The General John A. Logan Museum, which has materials from his life, political and military careers, was not even aware that he had collected Indian objects until an ASM curator contacted them.

Ethnological Collections Curator Diane Dittemore would love to find out more about how the general came into possession of the objects. It seems unlikely that they were "war booty." Instead, such items were typically purchased by, or given to, visiting governmental dignitaries. One example is the pair of Modoc bows (see E-1444 and E-1445 in the slideshow below), with a burned dedication to Logan from Oklahoma trader D.B Dyer.

One particularly troublesome feature about the collection is that several of the pieces appear to have been made after the general's death in 1886. Further research into the lives of Logan's wife and daughter may unearth clues as to how this might be the case.

These objects were donated to ASM over time, from 1939 to 1942, by the general's grandson, Tucsonan John A. Logan, III. He died in Tucson in the 1970s. Any reader/viewer who might have known Logan during the time he lived in Tucson is asked to contact us. 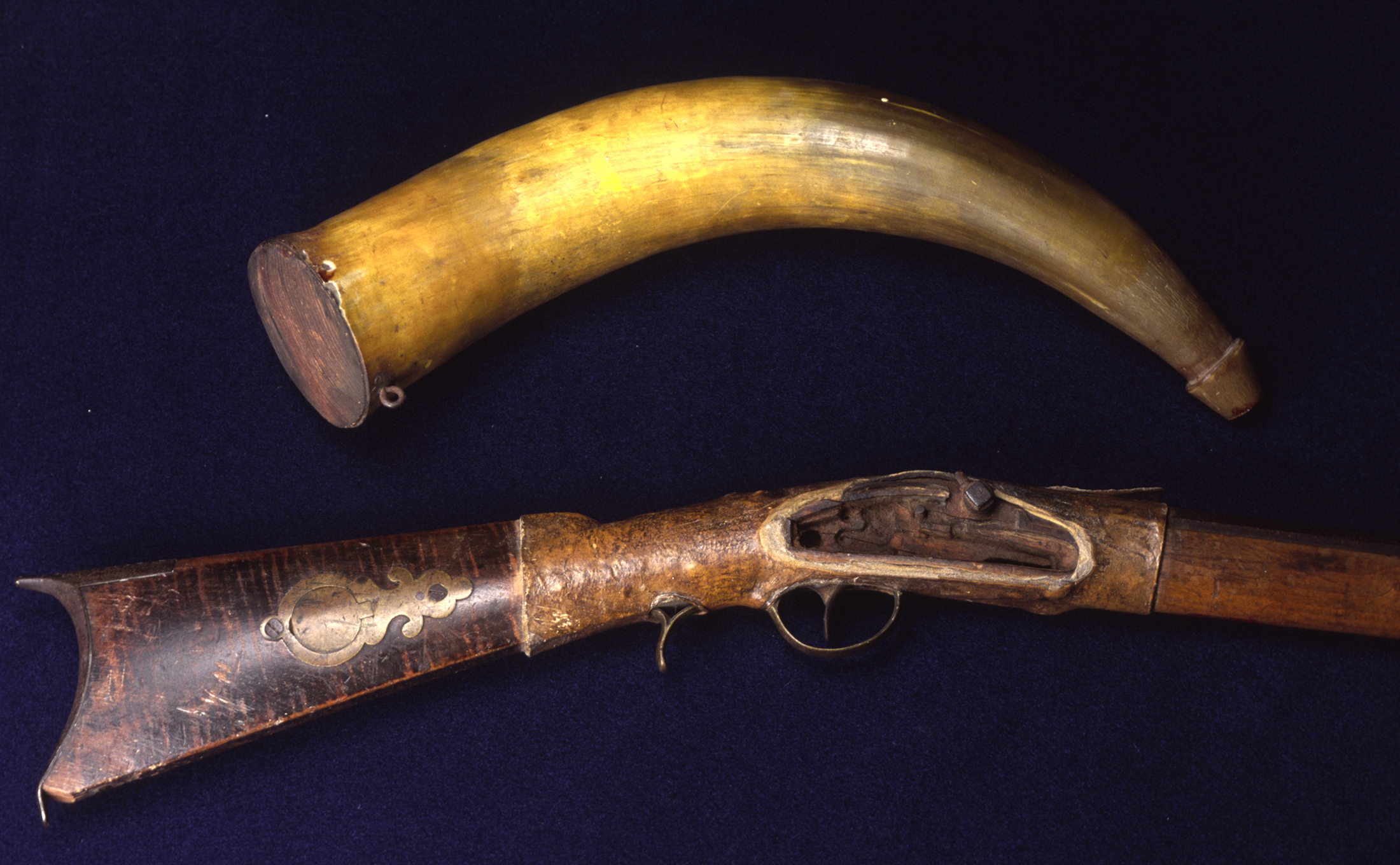 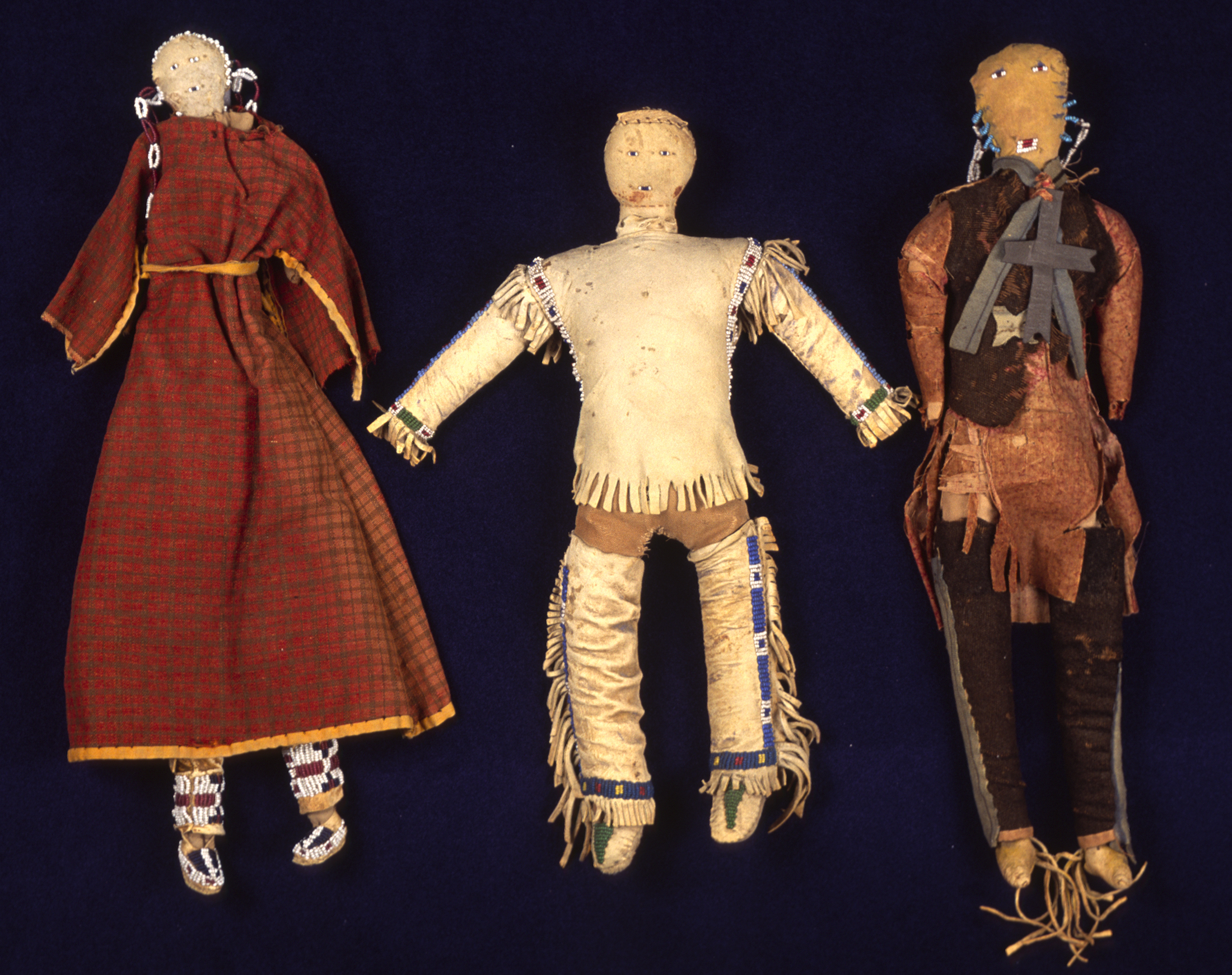 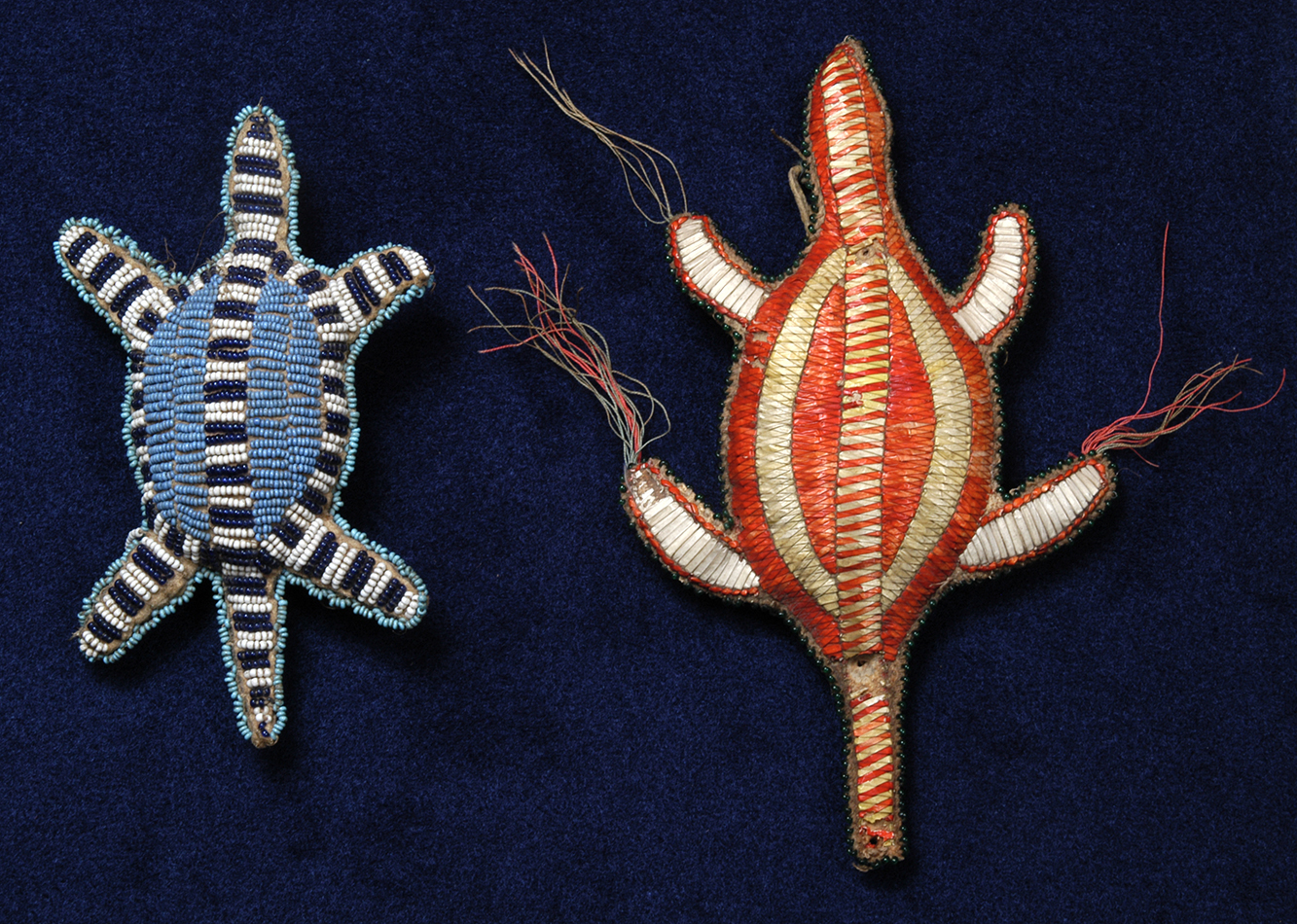 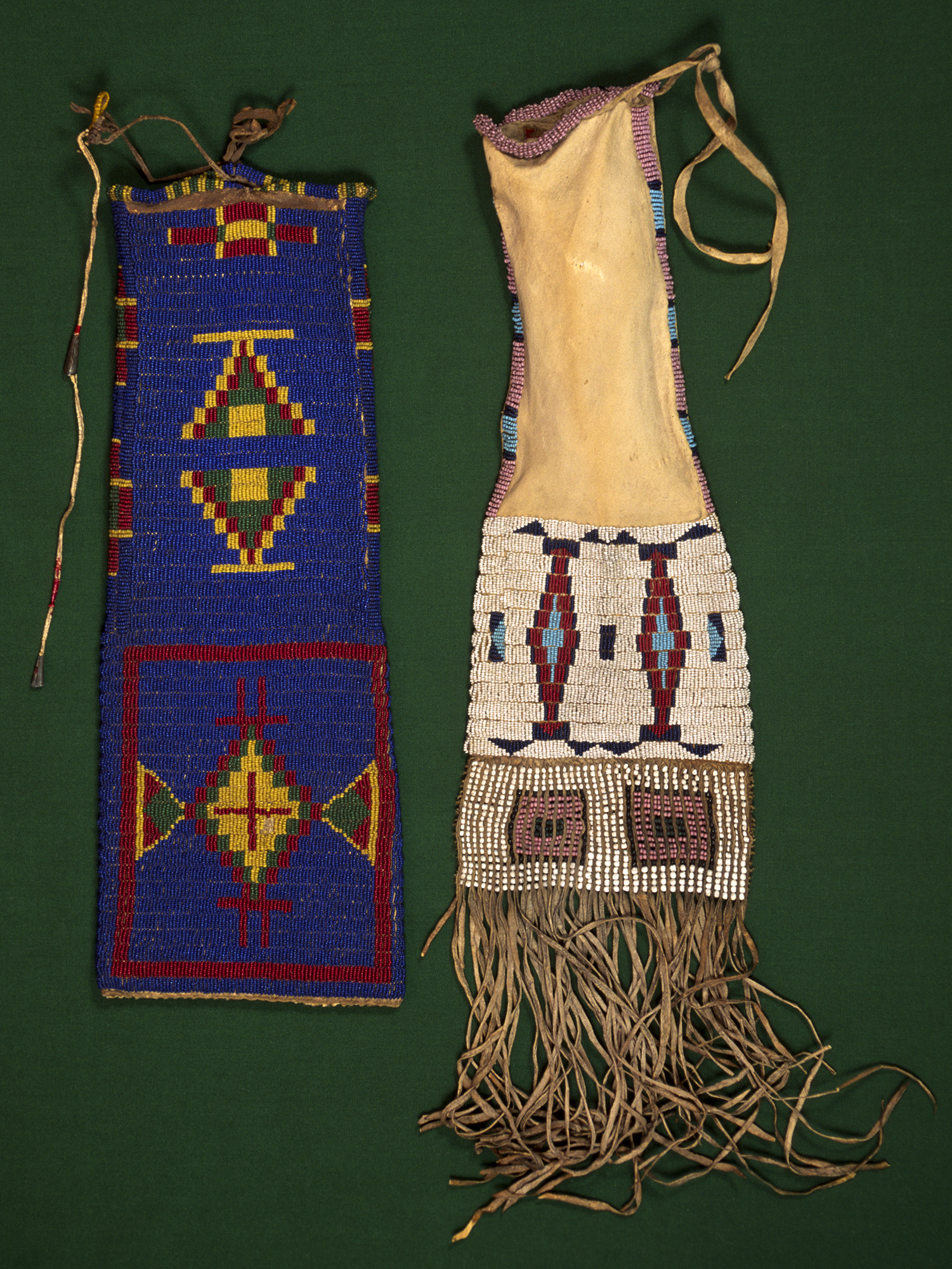 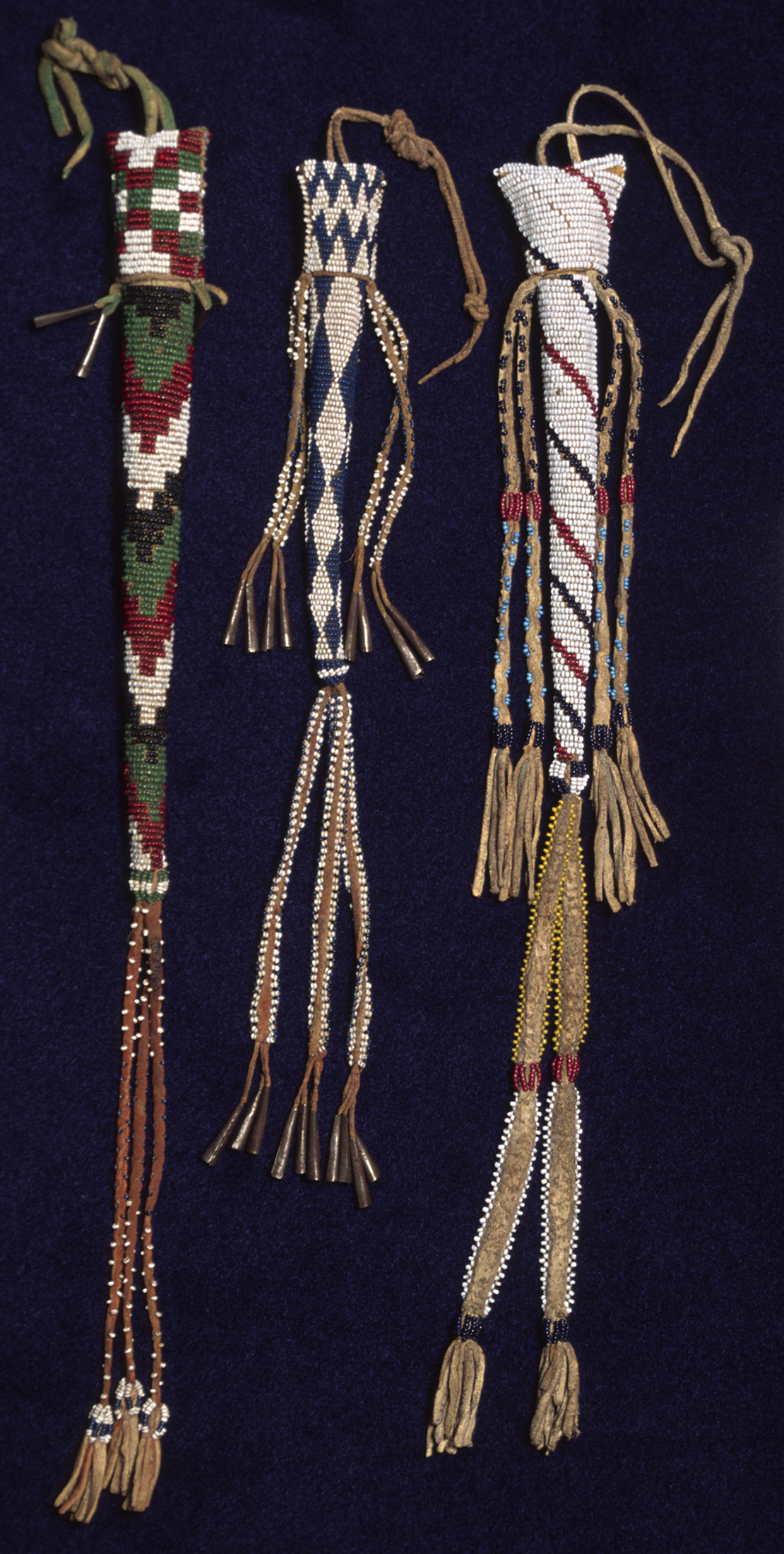 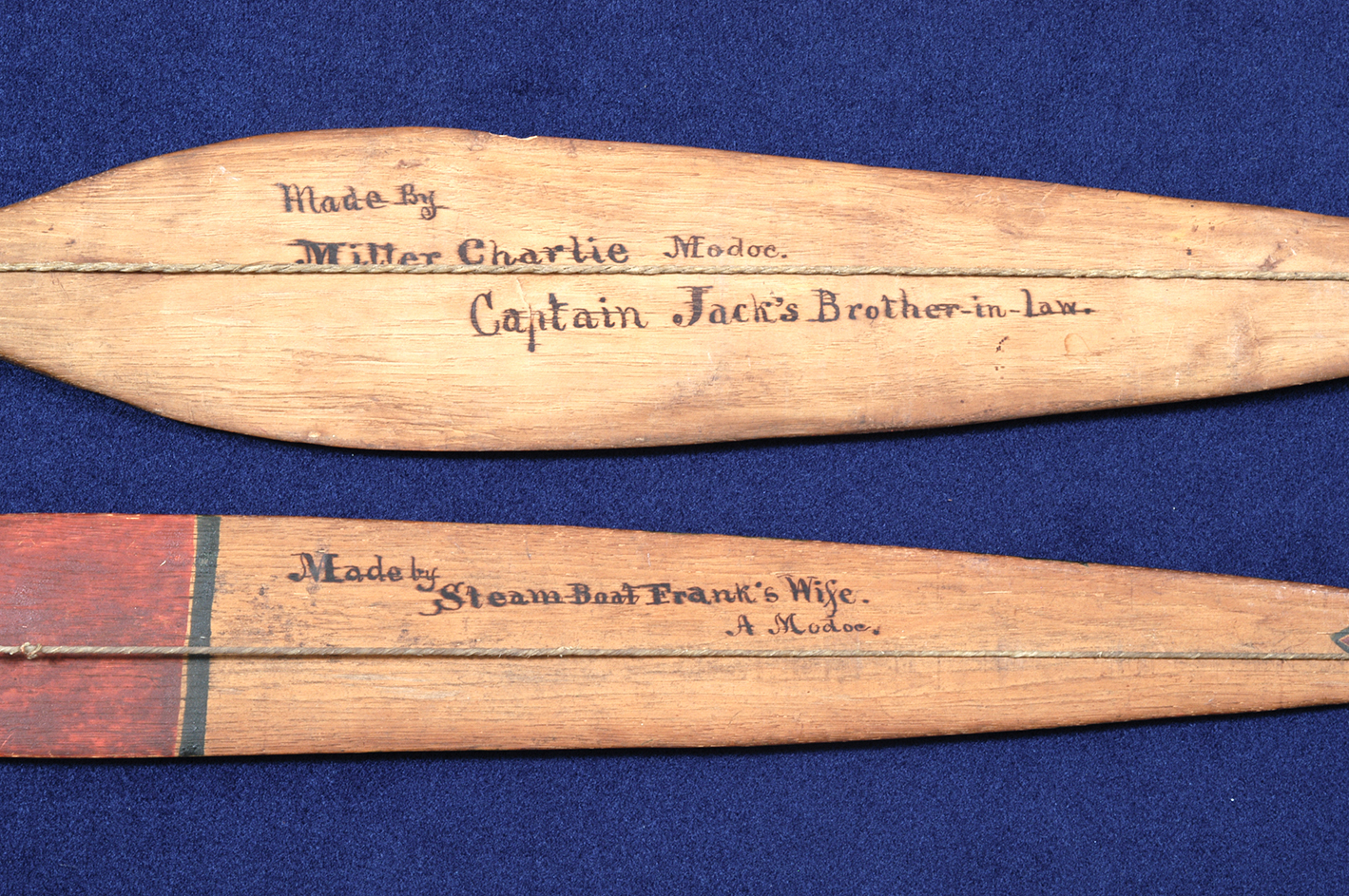 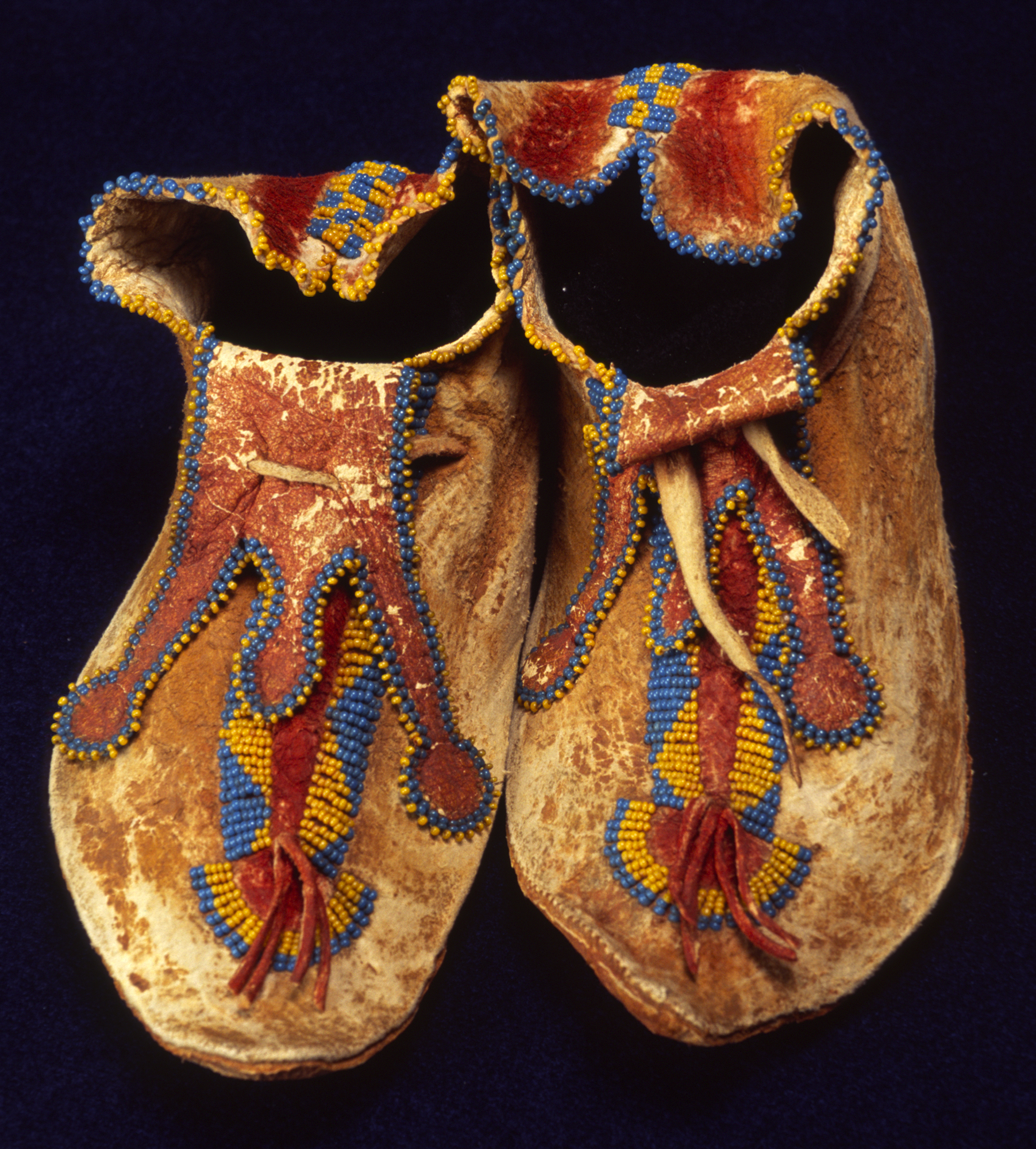 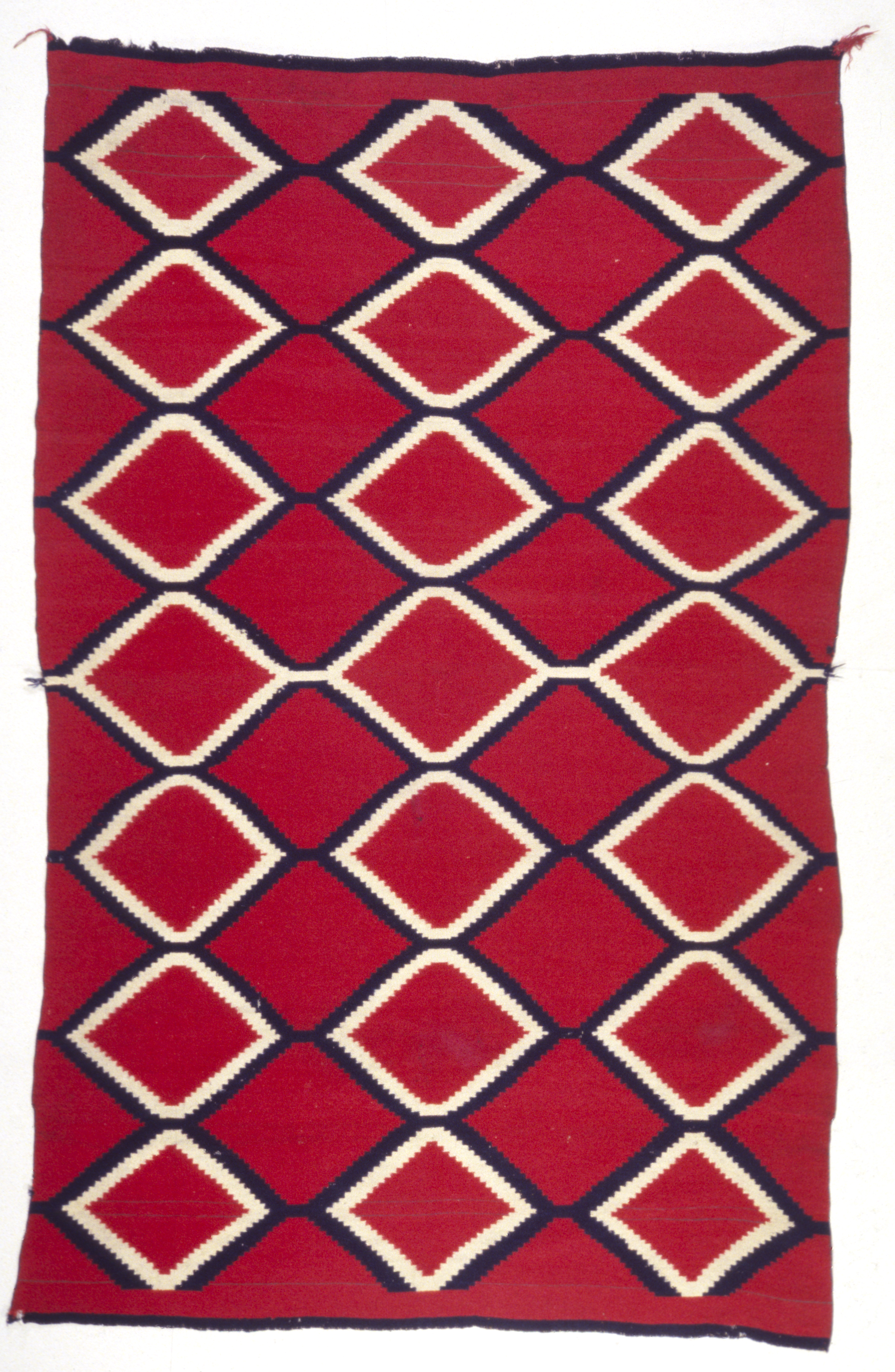 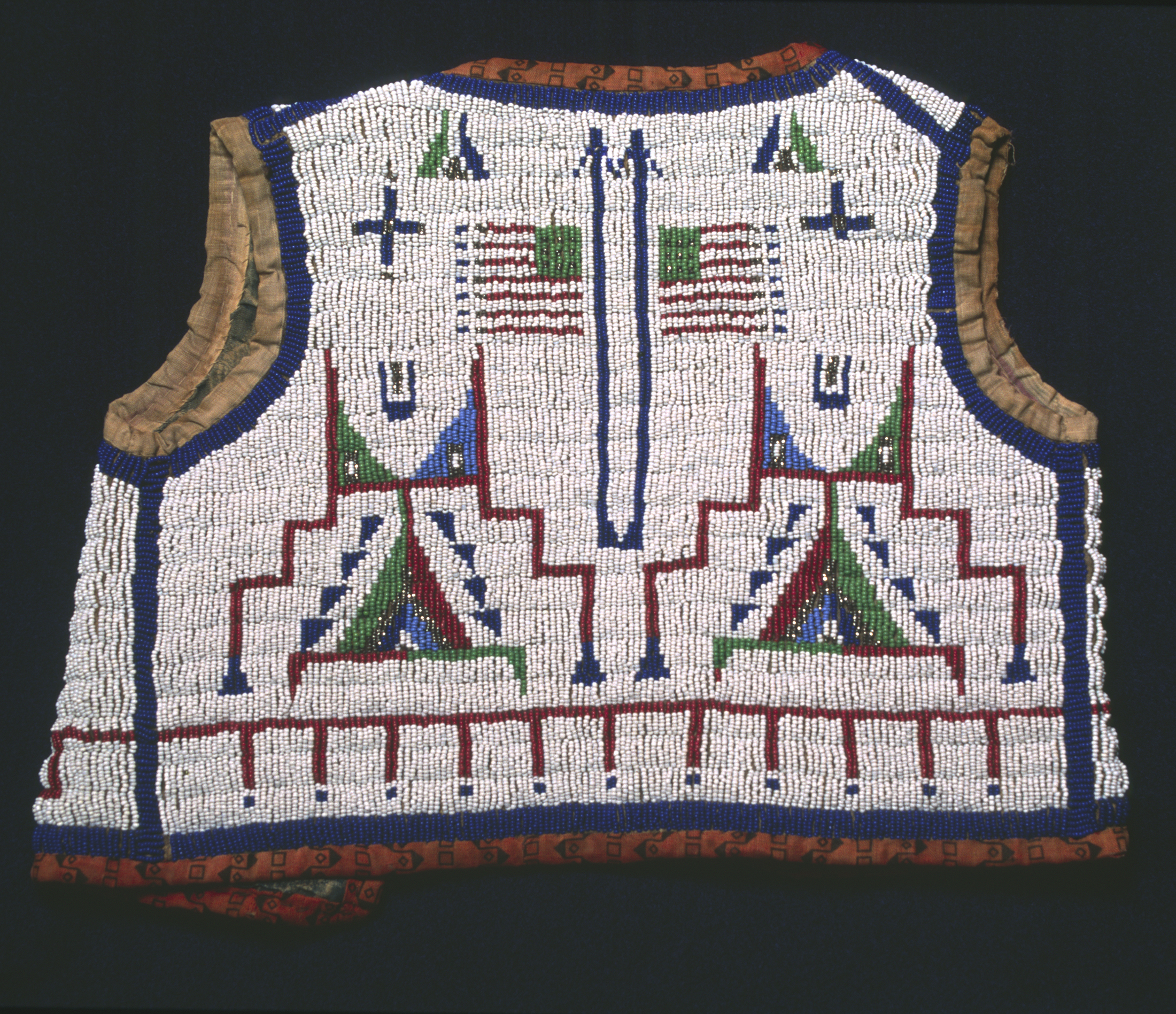 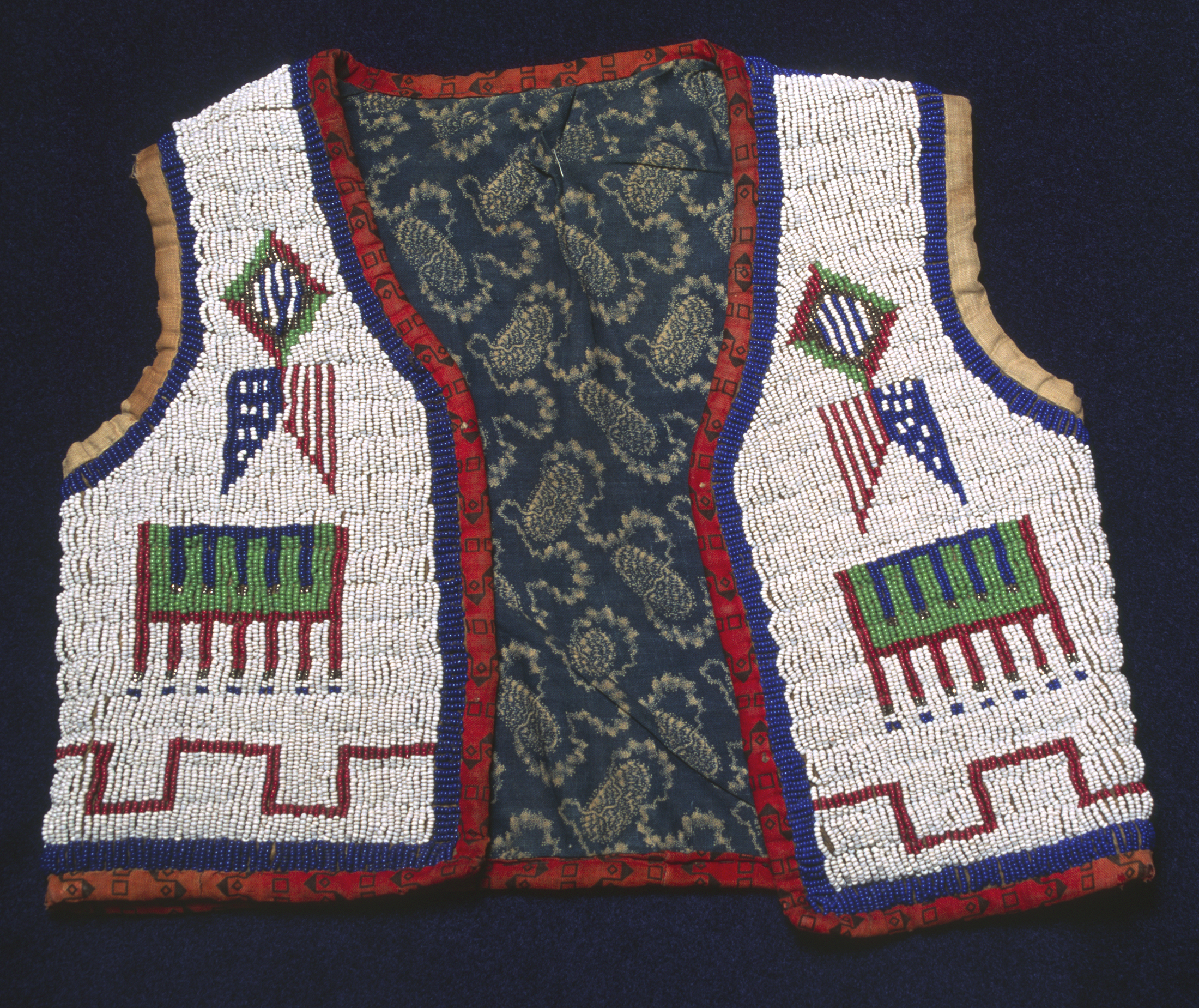 Cat. No. E-1533. Diné (Navajo) concha belt, 1870-1883. Silver, leather. This type of concha belt is the earliest type, sometimes referred to as First Phase in a dating system of unclear origin. The conchas have pairs of triangular cuts through which the leather would be threaded. The edges have holds punched in to each scallop.

Cat. No. E-1519. Miniconjou Lakota Pictorial Beaded Pipe Bag, ca. 1880. The function of this bag was to hold a ceremonial pipe and tobacco. Such bags were extremely important to Native men on the Plains. They were usually made for them by wives or other family members, and the fineness of the beadwork conferred status upon the owner. There are indications the scene depicted is of an event from 1875 when a group of Lakota warriors raided the Crow Agency headquarters to steal horses. The bead artist was likely a Miniconjou Lakota woman from the Cheyenne River Reservation (now in South Dakota). A male figure is depicted with a name glyph above him of a long-necked white bird. The glyph refers to White Swan, a chief of the Miniconjou Lakota from 1866-1900. Five pipes are shown with five heads, referencing five successful war parties. A mounted warrior drives a herd of horses before a building with three smoking chimneys—a prominent feature of the Crow Agency.

This from an essay written in the quarterly newsletter of the General John A. Logan Museum in 2006, and based on a first-person account published in the Los Angeles Daily Times on May 30, 1903: "We were in Petersburg, Virginia, and had taken advantage of the fact to inspect the oldest church there, ...we passed to the building through a churchyard...and as we passed through the rows of the graves I noticed that many of them had been strewn with beautiful blossoms and decorated with small flags of the dead Confederacy. The sentimental idea so enwrapped me that I inspected them more closely and discovered that they were every one the graves of soldiers who had died for the Southern cause. The actions seemed to me to be a beautiful tribute to the soldier martyrs and grew upon me while I was returning to Washington." Mary took this idea home to her husband and...told him that she had a wonderful idea to create a Decoration Day for Union soldiers who died in the "Late War of the Rebellion..." Thus Logan issued General Order No. 11, and Memorial Day was eventually celebrated as a national holiday.

"Citizen Soldier," a quarterly publication of the General John A. Logan Museum (October 2006) and The Los Angeles Daily Times (May 30, 1903).