This online exhibit highlights the handiwork of a most remarkable woman from Arizona’s recent past, Goldie Richmond.

A big woman in many ways--an animal trapper and Native goods trader, Goldie stood 6 feet 4 inches tall. Her stature as well as her incredible exploits, such as being on the winning end of a wrestling match with a bobcat, made her somewhat of a legend.

Goldie Preston was born in Kansas in 1896. When she was 31, Goldie married Marion Tracy, becoming his third wife. In 1927, the couple came to the remote desert country of southwestern Arizona. Goldie was 31 and Marion was 68 and in declining health. The Tracys tried to earn a living through prospecting, but when the Depression hit, they switched to trapping in the unending effort to survive in the harsh country.

In 1932, Goldie and Marion opened Tracy's Trading Post at San Simon, 110 miles west of Tucson on the Tohono O'odham (formerly known as Papago) Reservation. Goldie learned to speak the Tohono O'odham language, and was widely known as one of the most respected Anglo traders on the reservation. Rosamond Spicer, an anthropologist who worked with the O'odham, wrote that people went miles out of their way to trade at Goldie's store.

After Marion's death in 1936, Goldie kept the trading license and continued to run the store. She married Jim Richmond in the 1940s, and the two of them stayed in San Simon another 20 years. 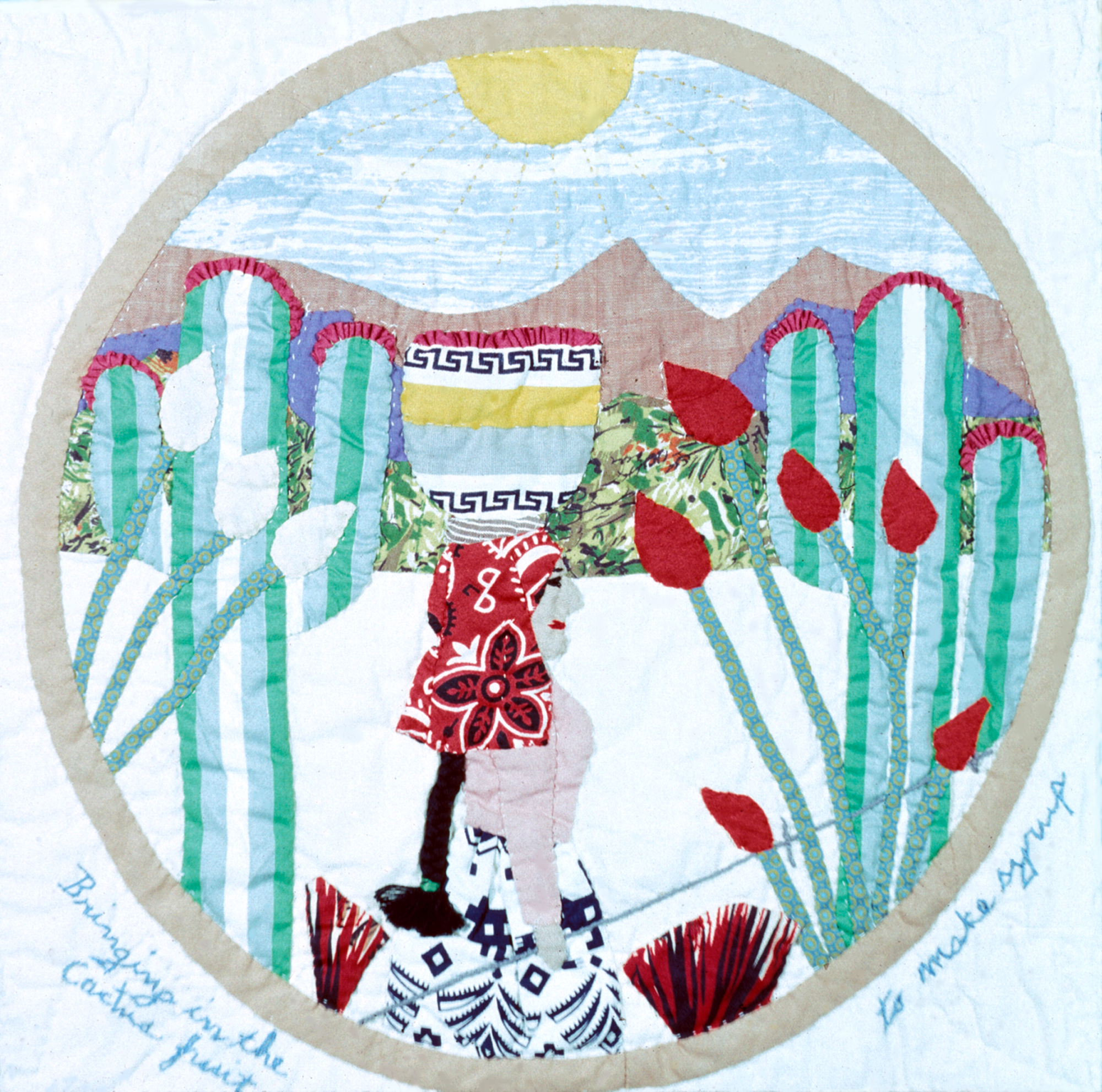 Brining in the Cactus Fruit - Row 1 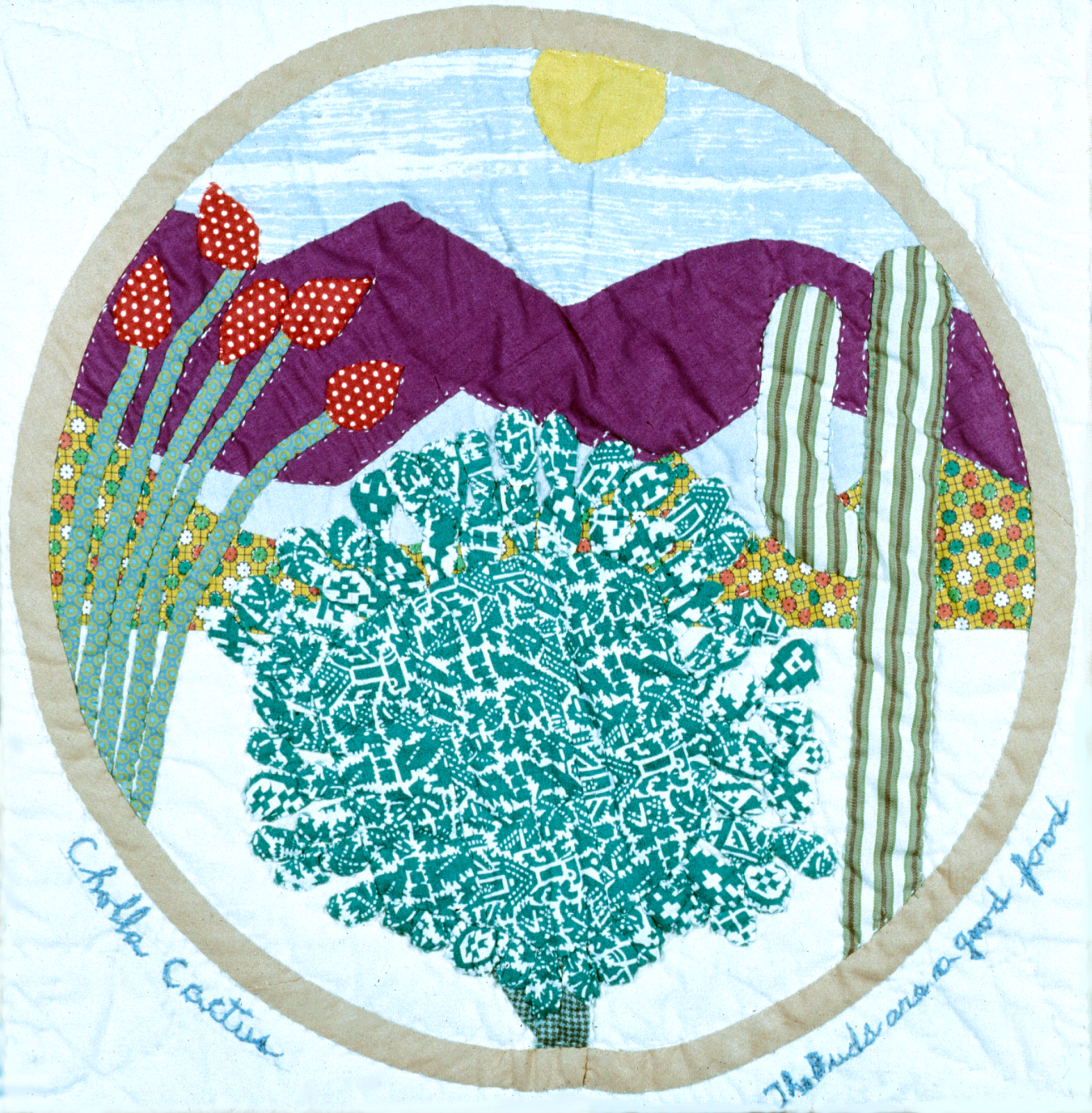 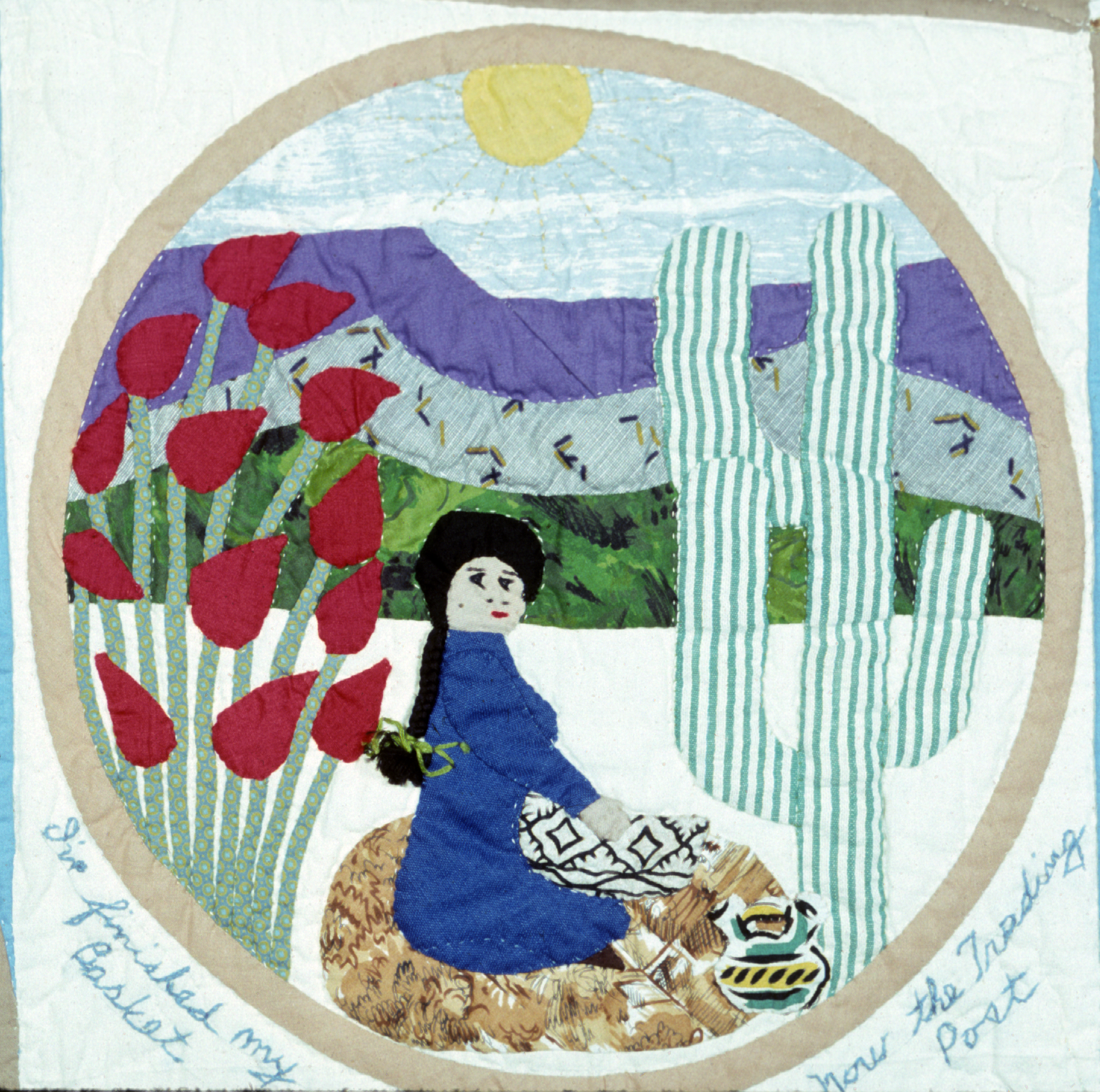 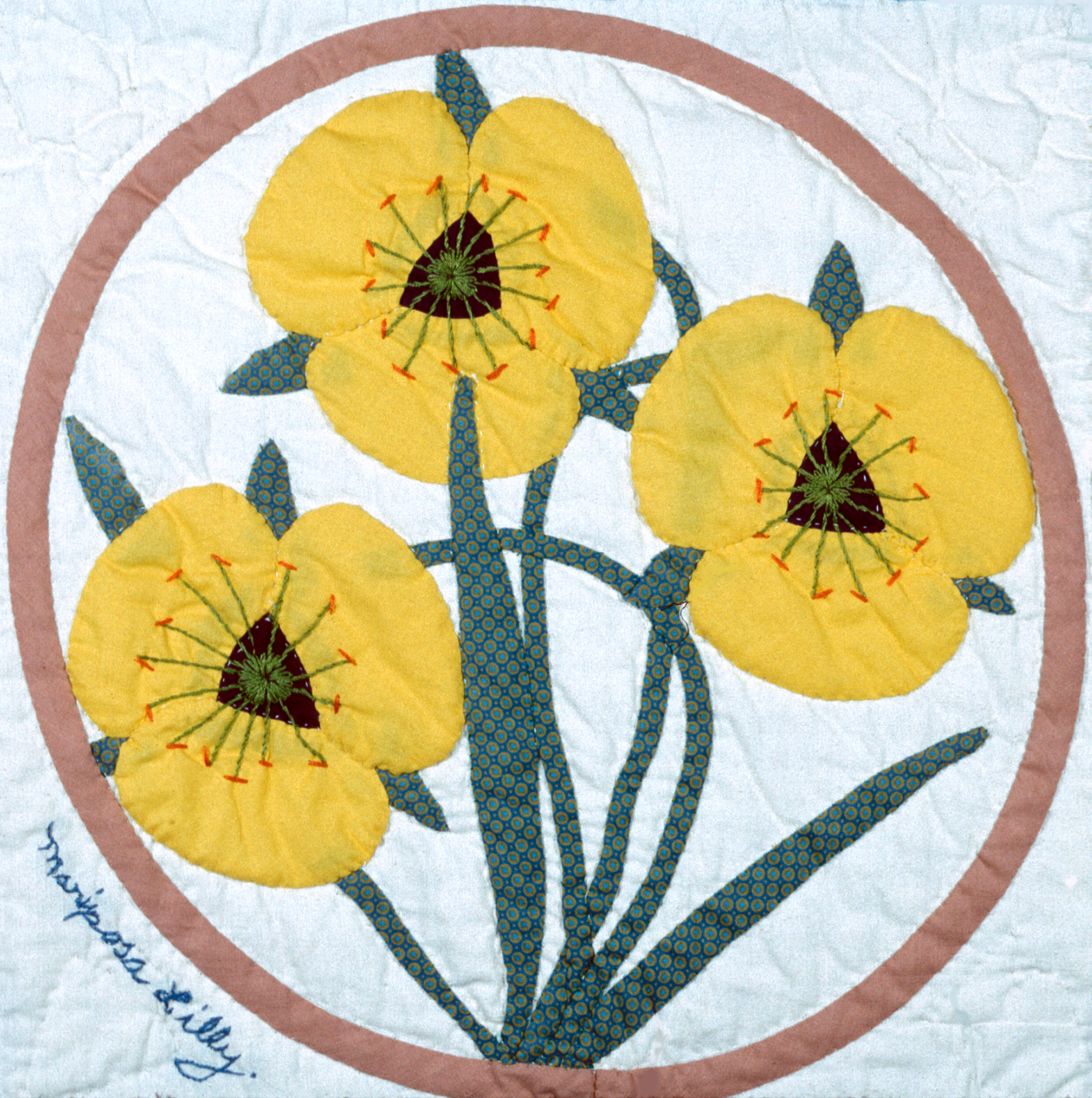 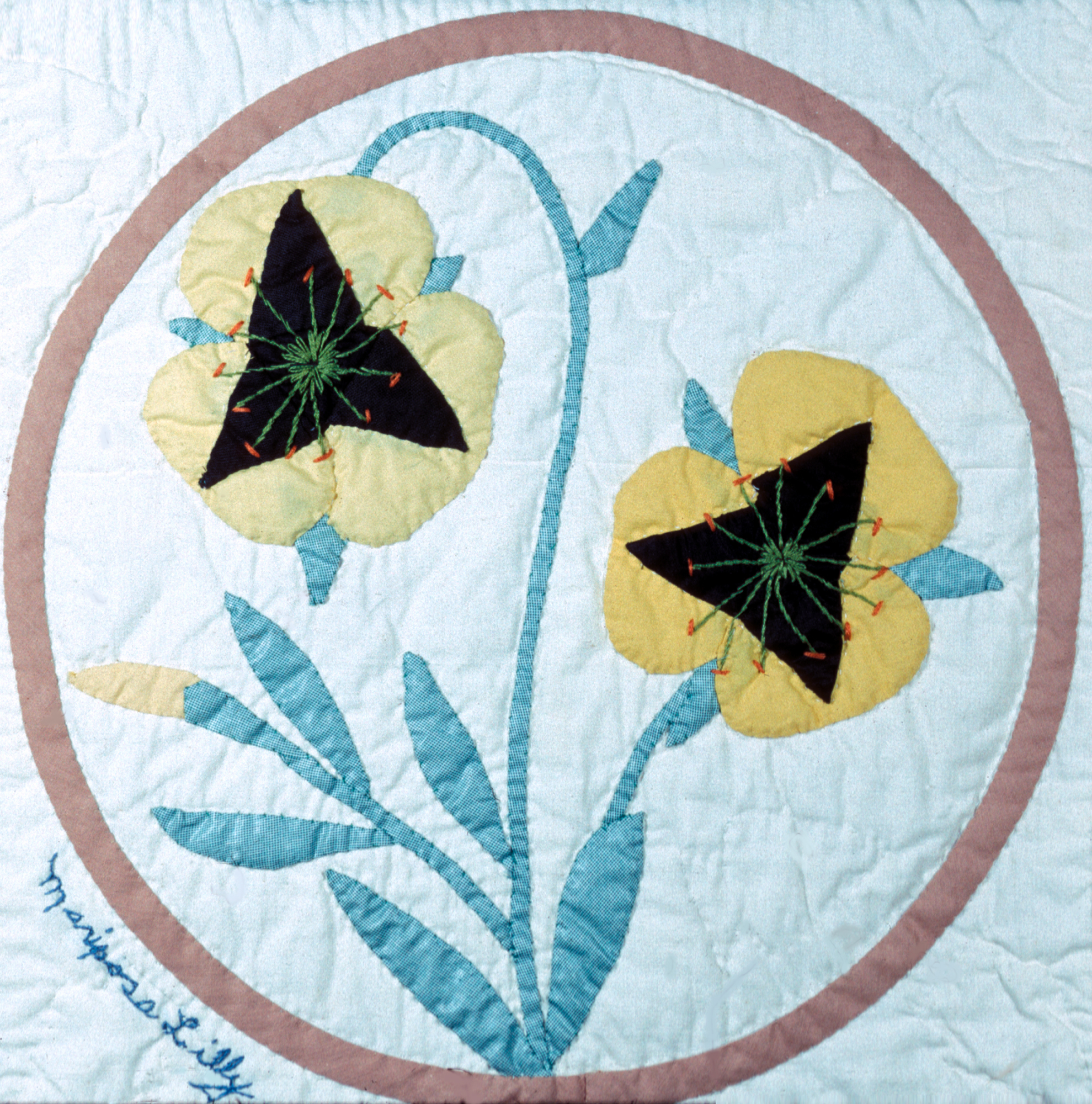 Goldie always stitched quilts to sell in the trading post. After her marriage to Jim, she had more time to develop her exceptional pictorial designs, which won blue ribbons and cash prizes at state and county fairs. Goldie's original appliqué quilts depicting scenes of Tohono O'odham daily life are magnificent fabric portraits of the Sonoran Desert and its people. The sale of her prize-winning quilts to passing tourists provided valuable income.

In the late 1960s, Goldie and Jim sold Tracy's Trading Post and retired to Mesa, Arizona. Goldie died there in 1972. By the time word of her death reached the reservation, it was too late for people to make the trip to town to attend her funeral. As a tribute to her life and friendship, a number of her O'odham friends held their own memorial service on the reservation where she is still spoken of with respect and affection.

Goldie embroidered captions on the the blocks for her Papago Activity's (sic) Quilt to interpret for the viewer the scenes she was depicting. Writing in the first person, she lent her voice to those O'odham whom she rendered going about their daily lives. 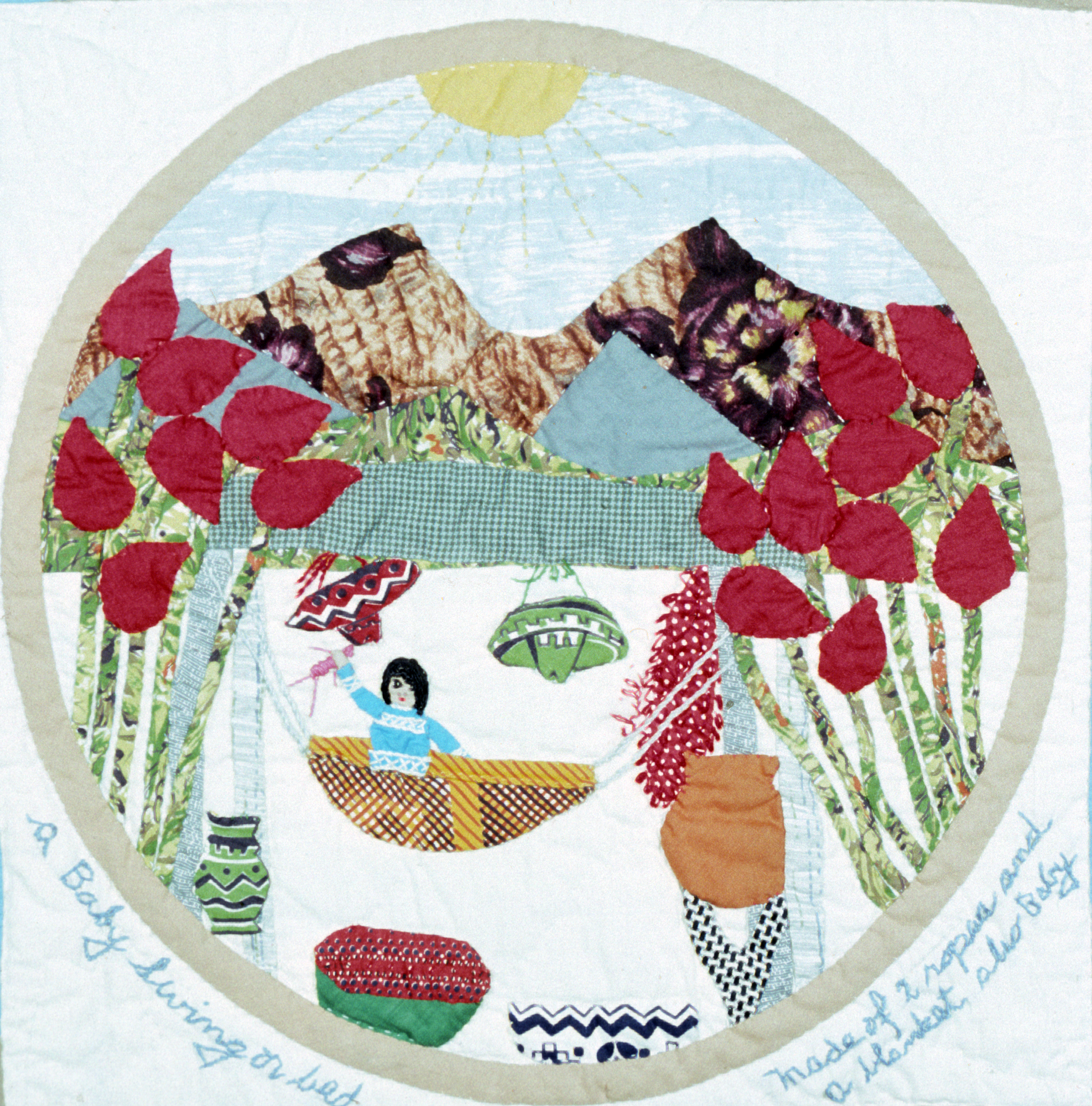 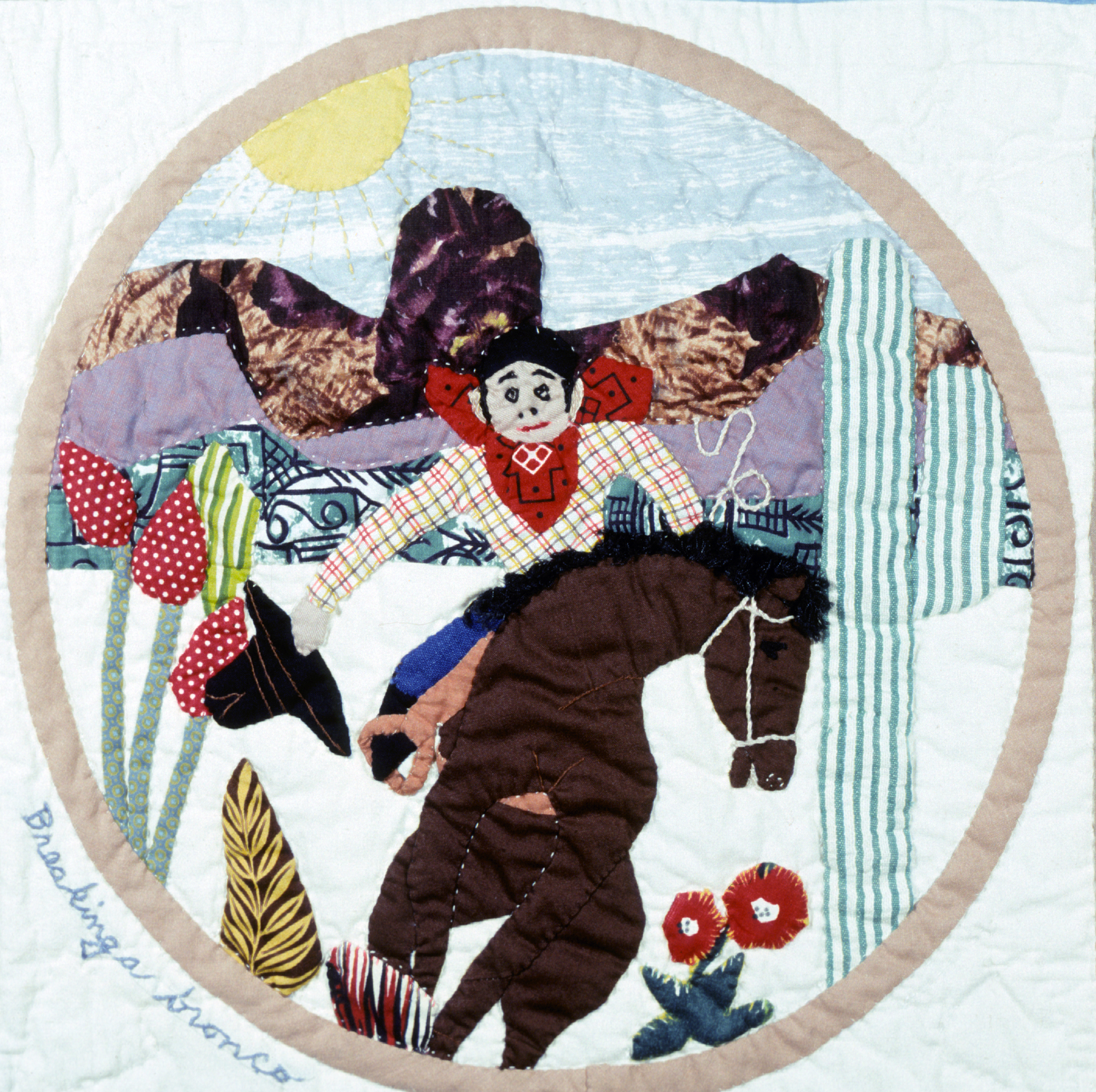 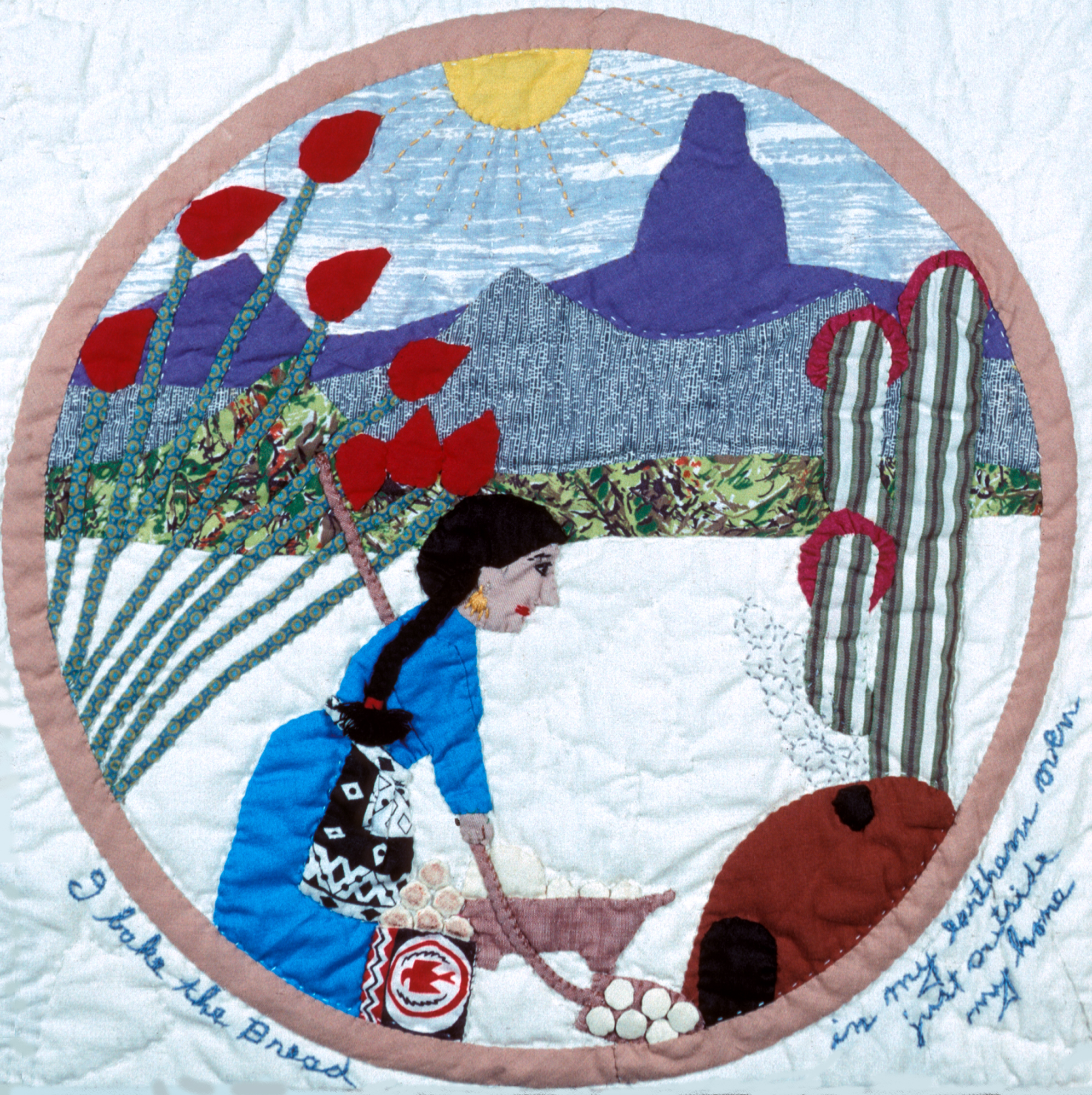 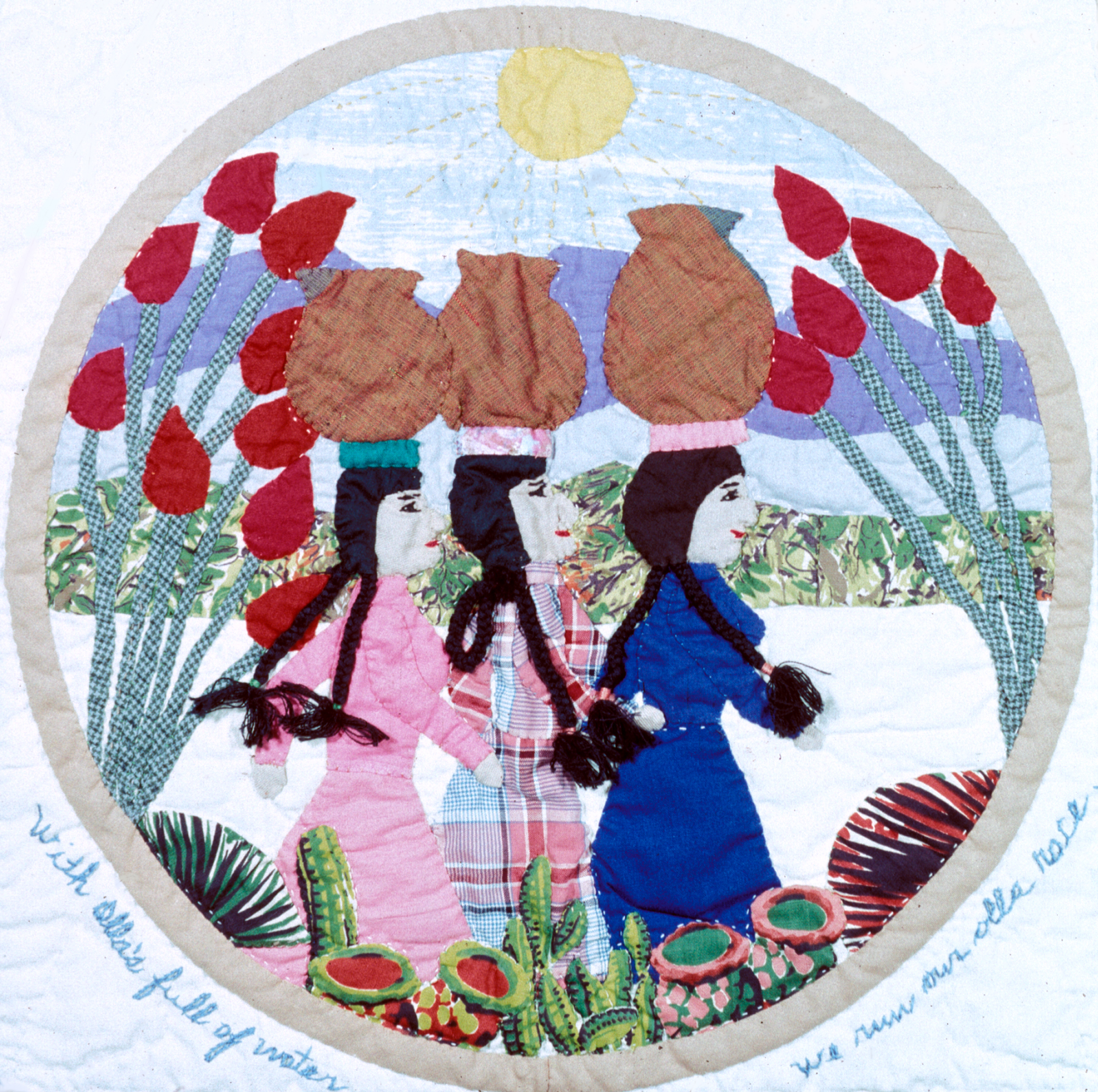 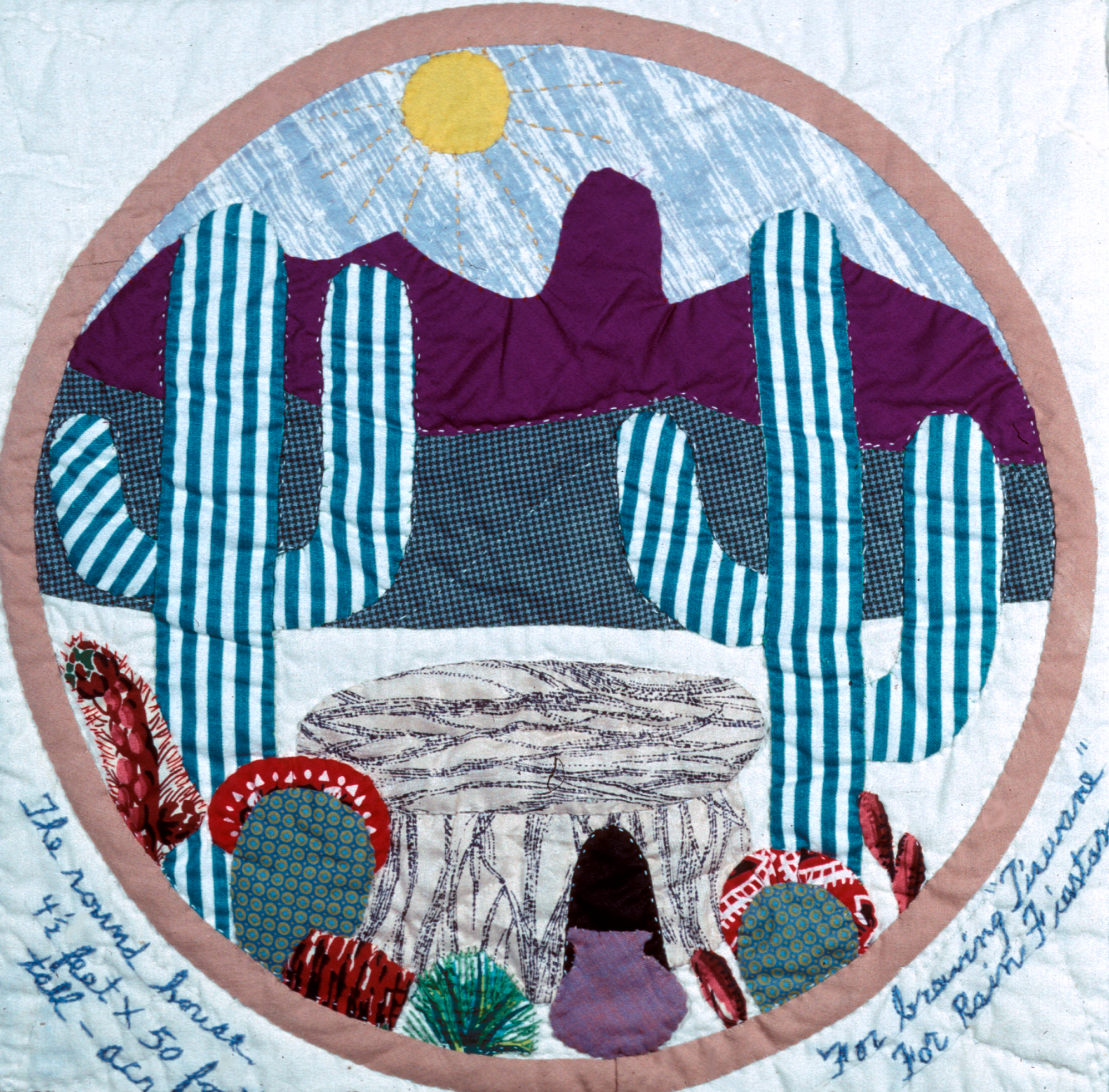 The Round House - Row 2
Previous Next

Today there are still well over 500 Tohono O'odham basket weavers. A select few have become well known and are sought out by collectors and dealers so that they have little need for outside assistance in marketing their creations. Others rely upon Indian traders who travel the reservation purchasing baskets for resale. Church groups also buy directly from weavers on the reservation, and sell the baskets through their networks. 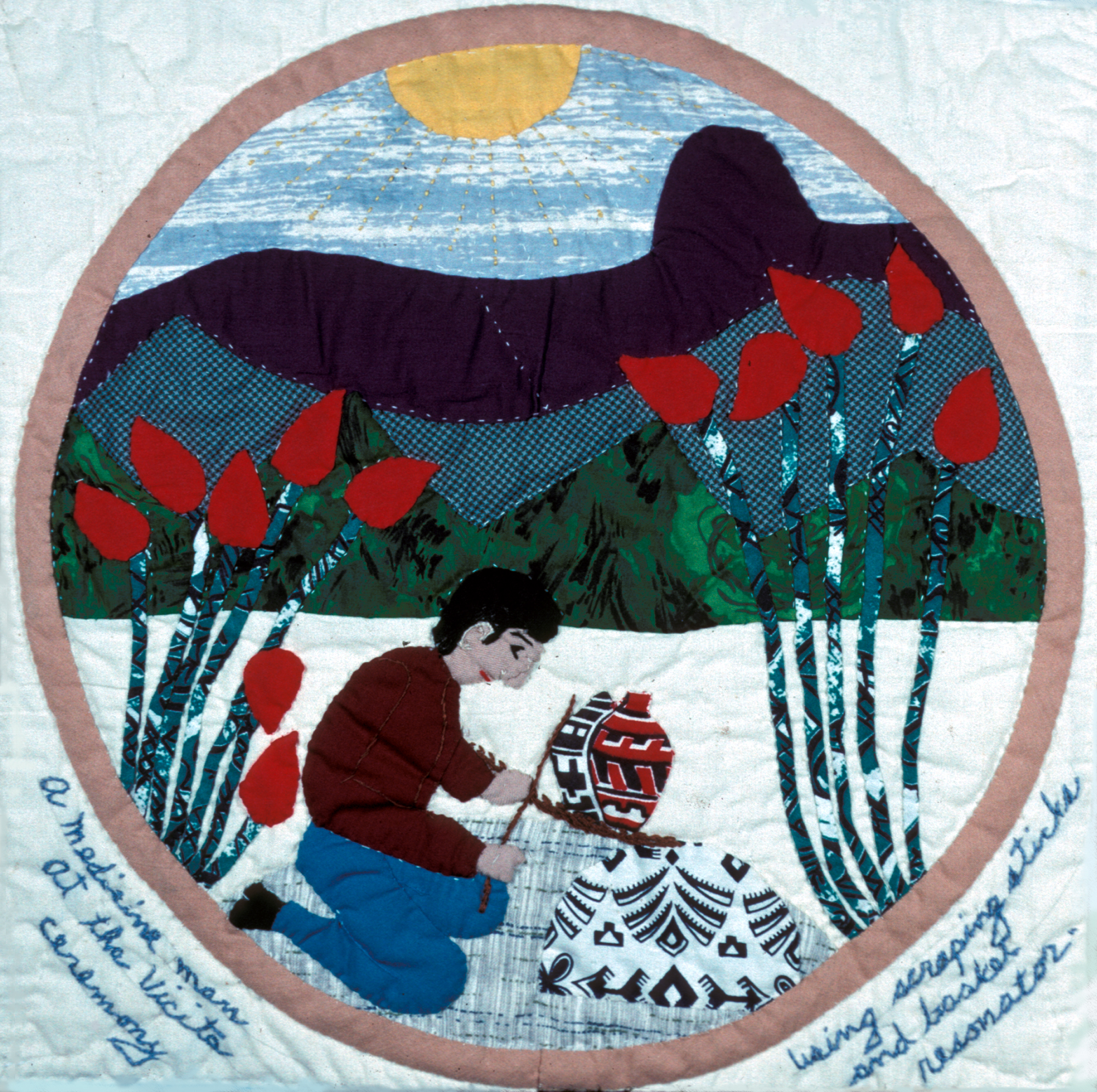 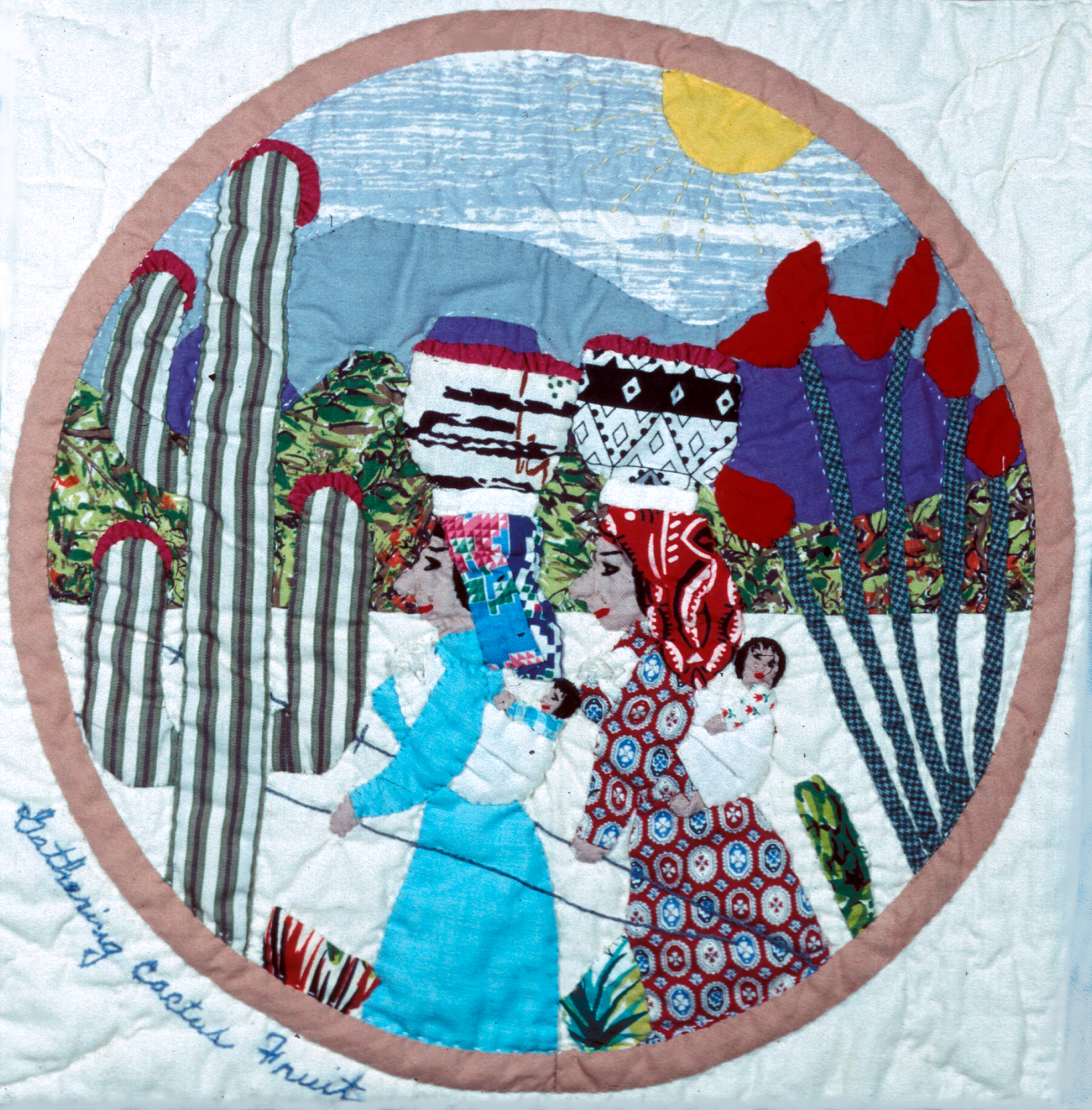 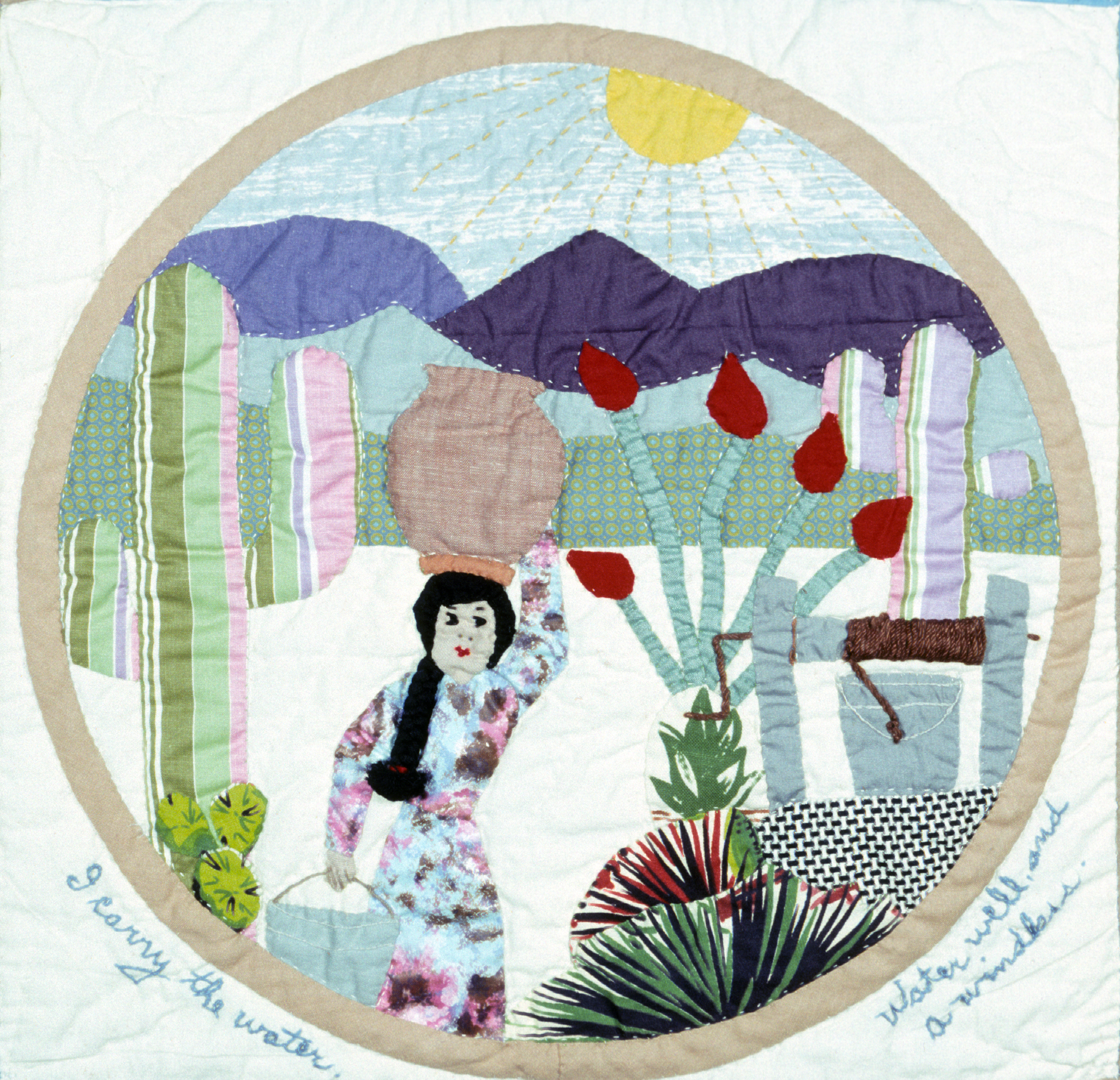 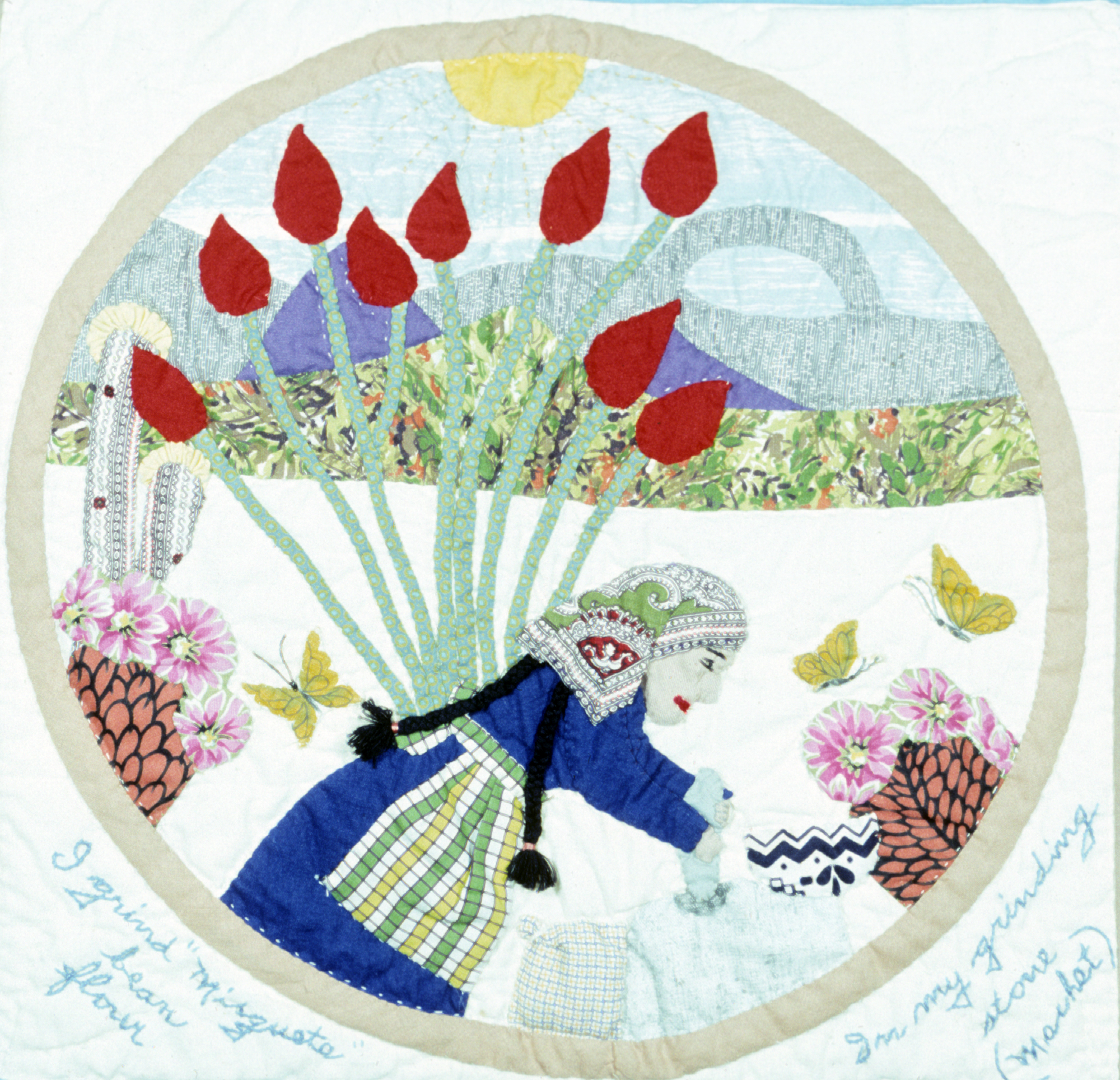 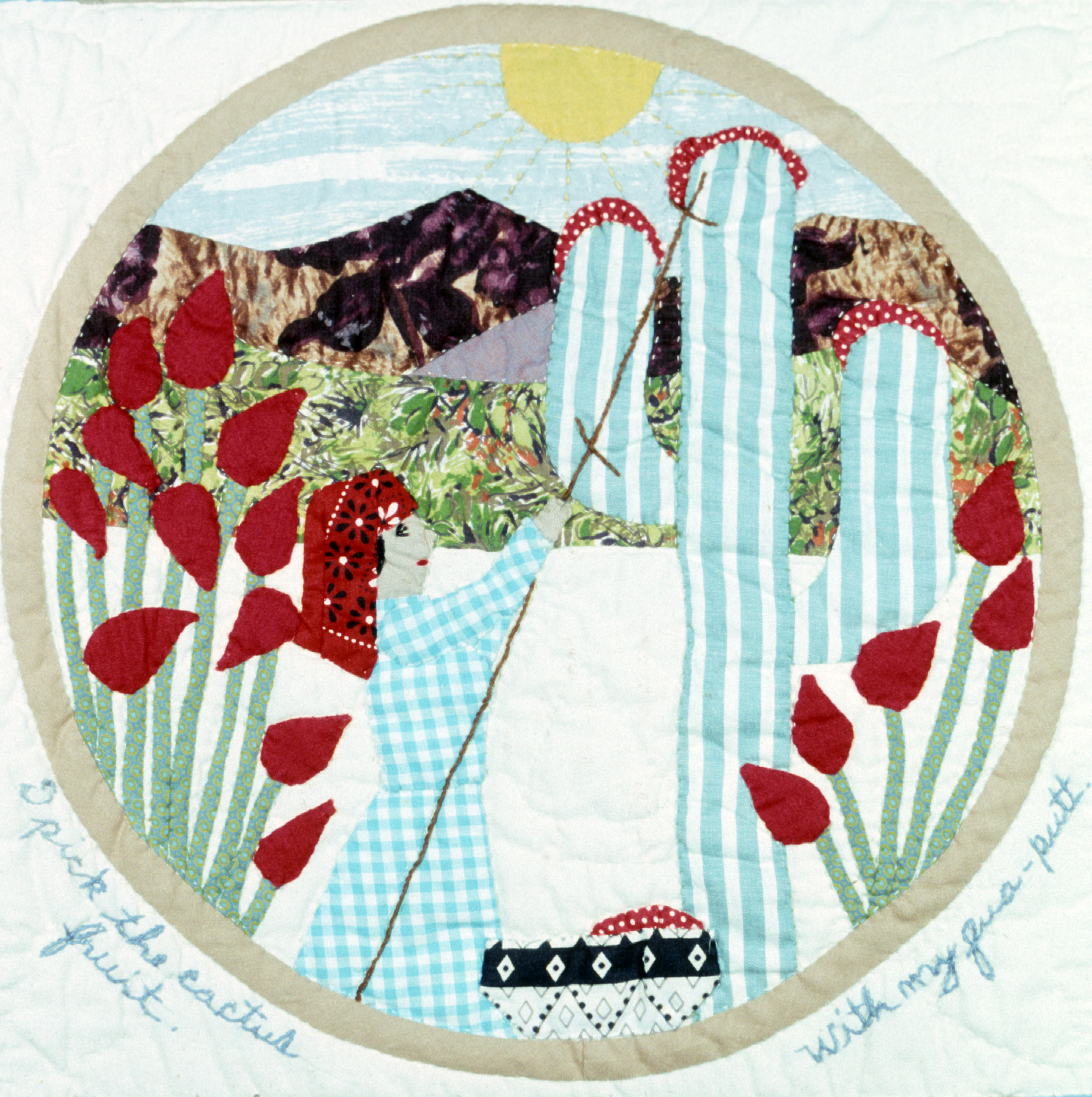 I Pick the Cactus Fruit - Row 3
Previous Next 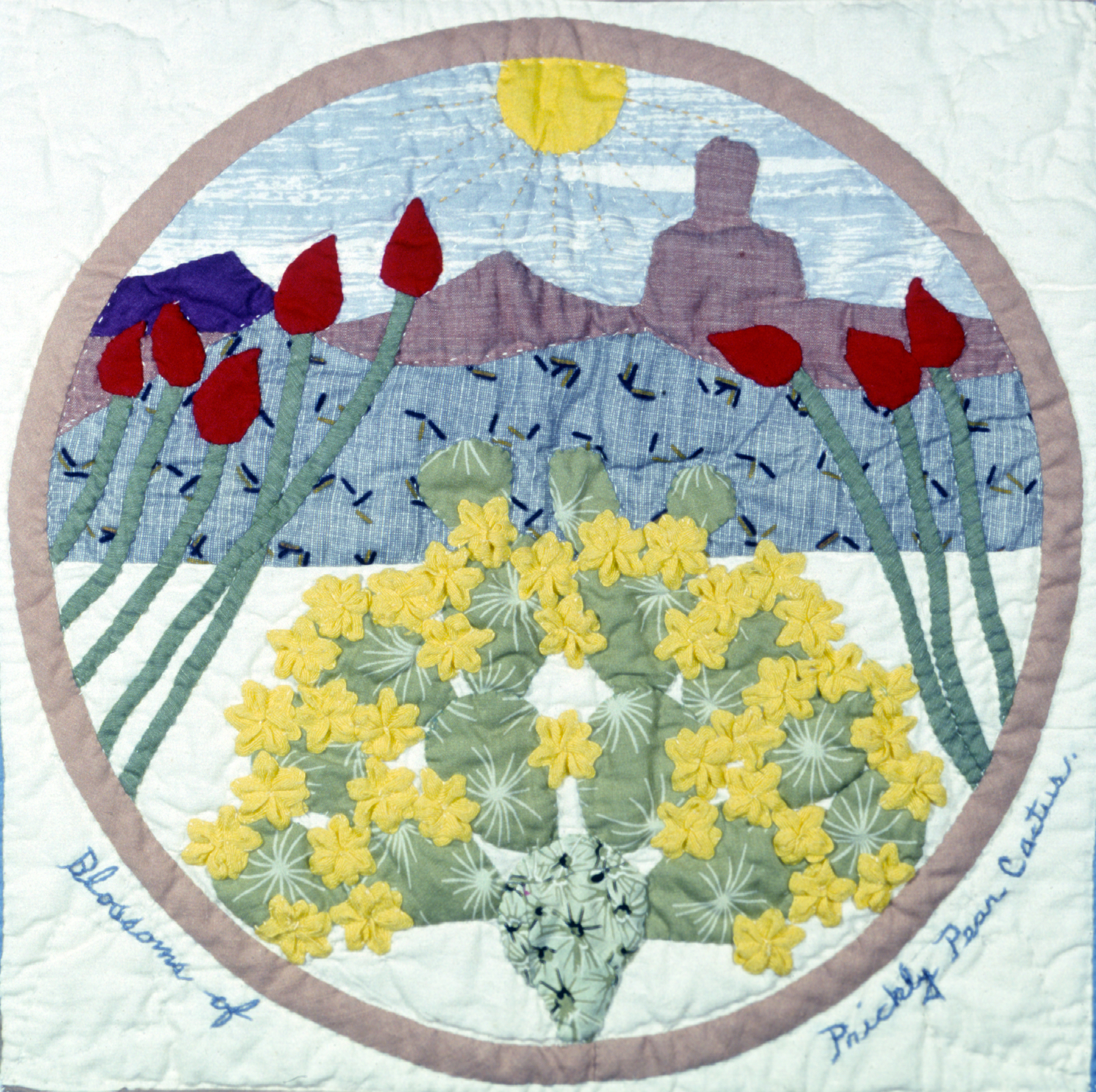 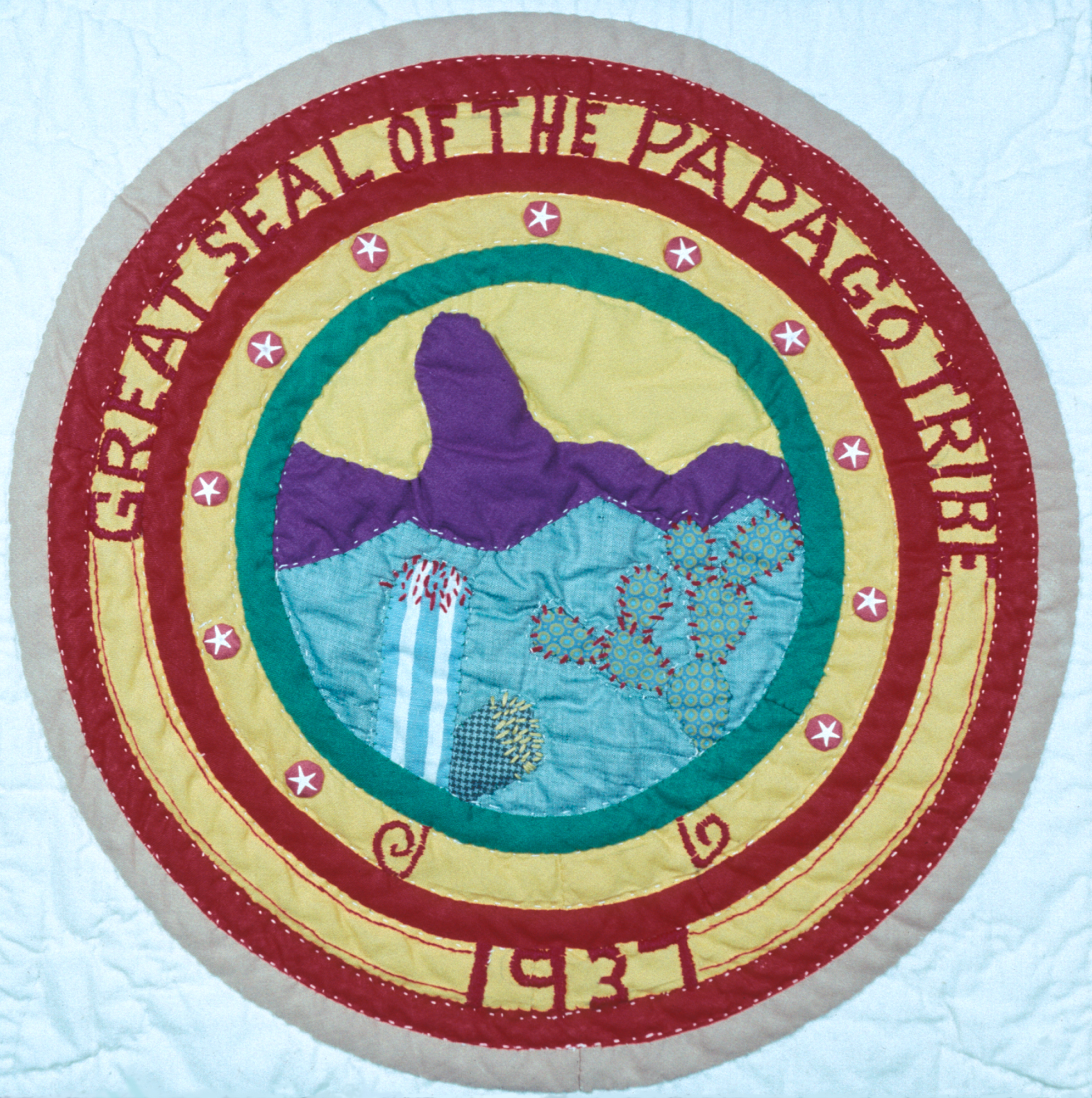 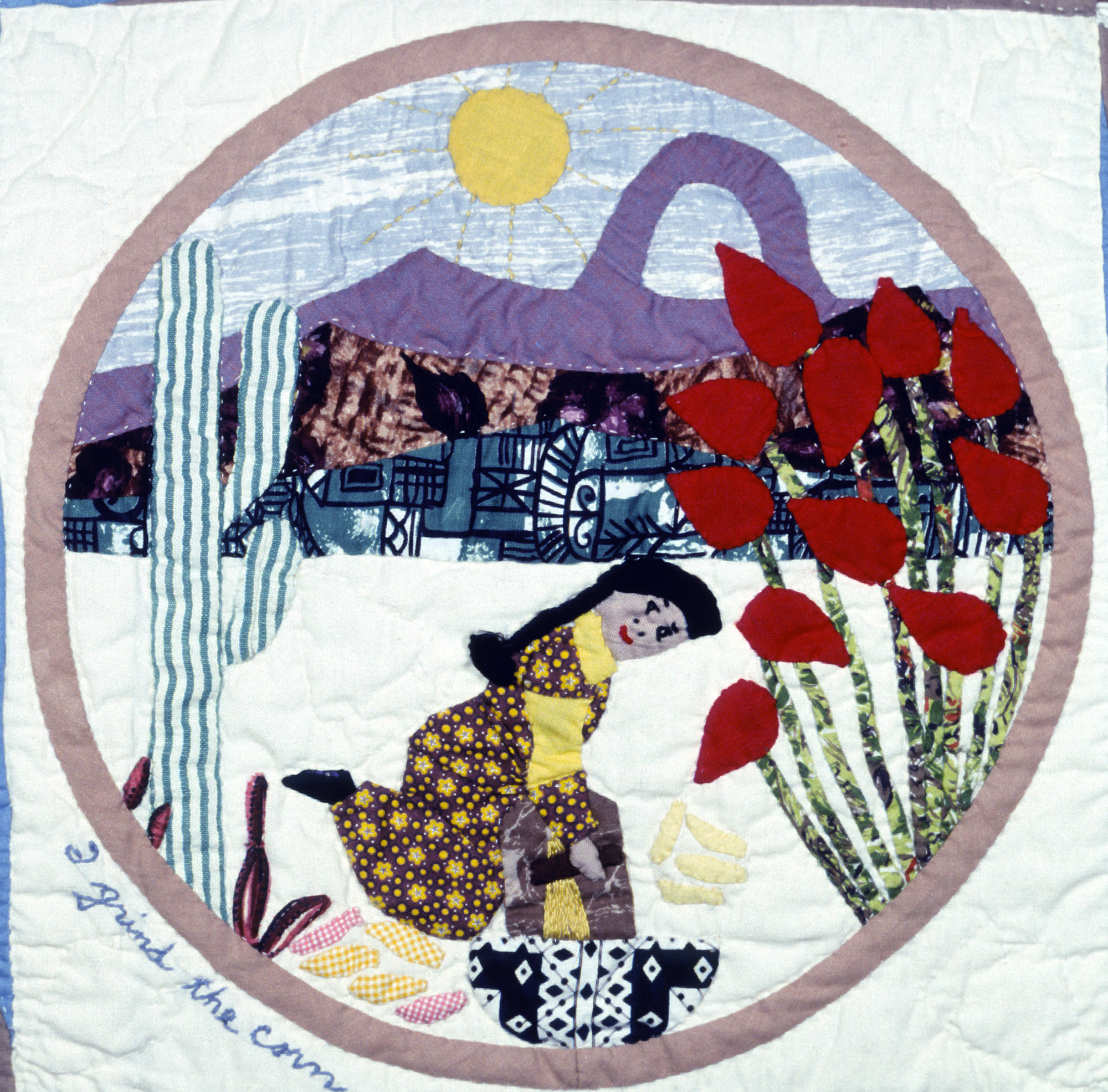 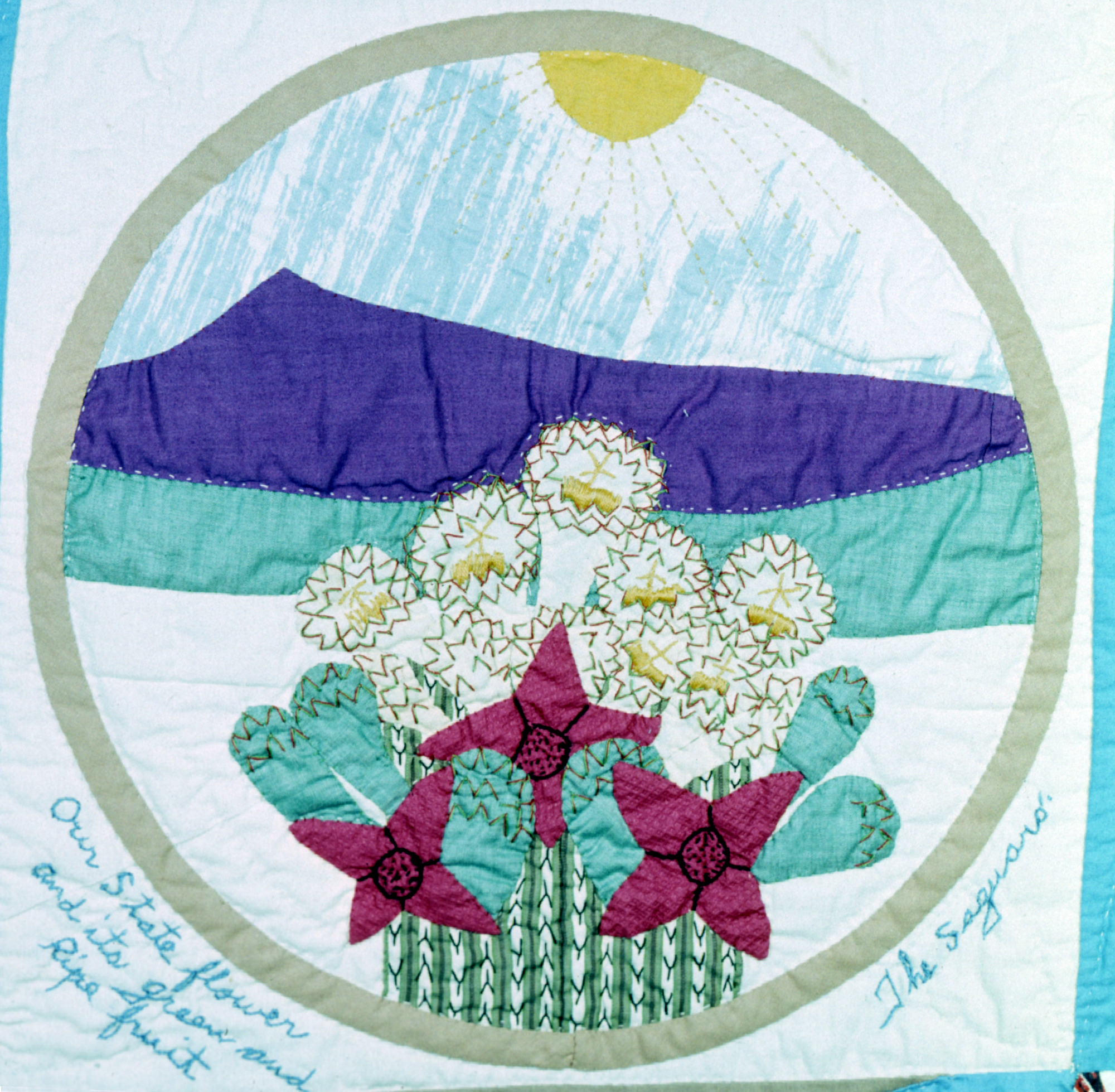 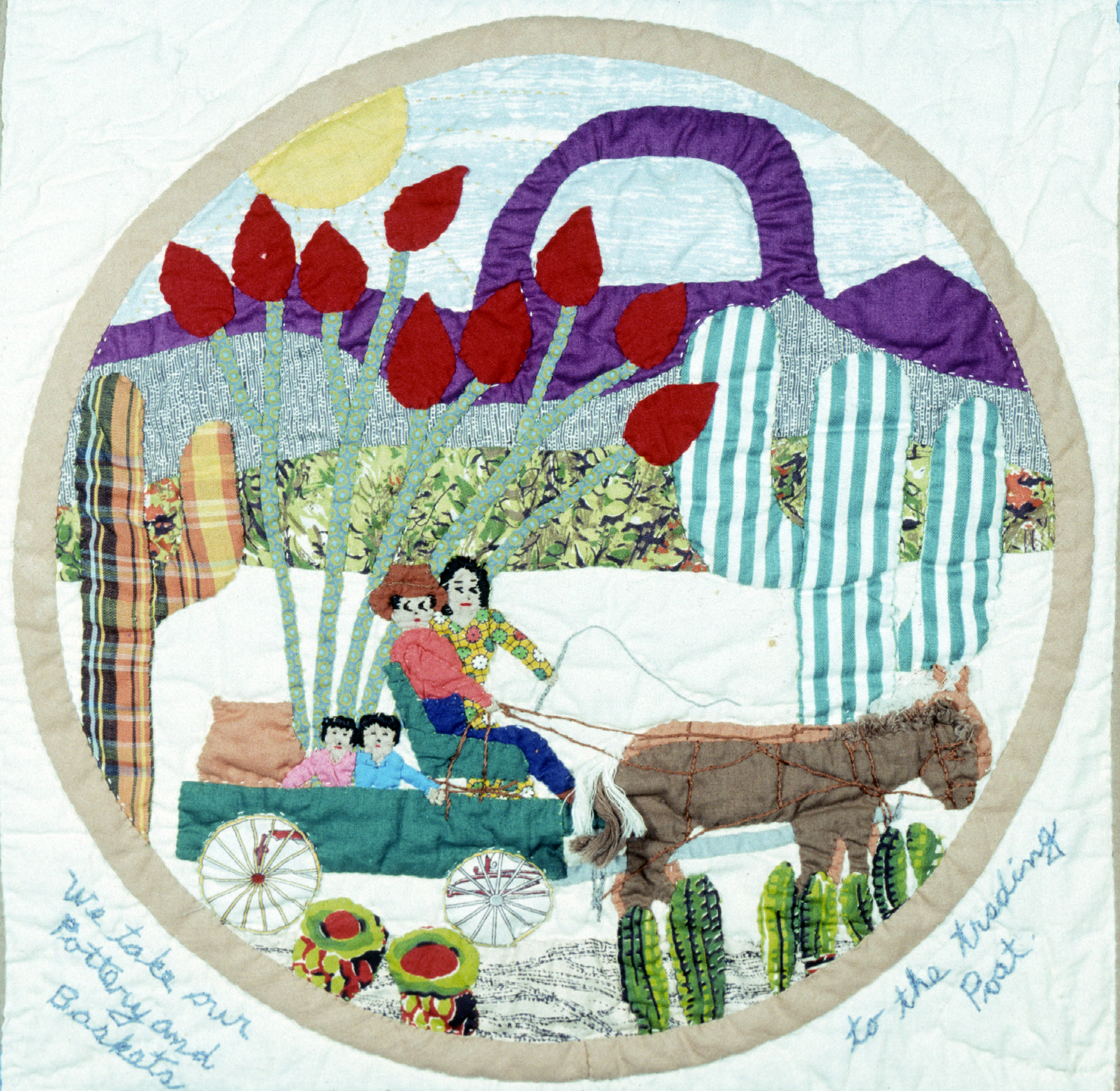 We Take our Pottery - Row 4
Previous Next

Gwyneth traveled the reservation, from sunup to sundown according to one account, purchasing baskets from weavers, which were then marketed to the outside world through retail networks. She consulted with the newly formed Tohono O'odham Tribal Council to create an all-Indian Tohono O'odham Arts and Crafts Board, which could take over for her once her tenure was completed. Mrs. Harrington had the pleasure of securing both Tohono O'odham and Akimel O'odham (Pima) baskets for a groundbreaking exhibition of Indian Art at New York's Museum of Modern Art in 1940.

During this same period, Goldie Richmond was actively promoting basketry and other craft sales. Described by anthropologist Bernard Fontana as "Goldie's own New Deal program," she bought and sold 20,000 O'odham baskets a year for three consecutive years in the 1930s, selling baskets to curio and department stores from coast to coast.

The combined tribal, private and public efforts served to provide essential support to Tohono O'odham basket weavers, assuring that their artistic productions would find an appreciative buying audience. The continued richness of the basketry arts among the Tohono O'odham is due in great measure to the work of Gwyneth and Goldie, the Papago Arts and Crafts Board, and the dedicated basket weavers for whom their work is a link to the O'odham Himdak, or Way.

This online exhibit is based on a 2001 exhibition at ASM that was co-curated by Diane Dittemore, ASM associate curator of ethnology, and Carolyn O'Bagy Davis, Tucsonan and author of a major publication about the life and work of Goldie Tracy Richmond (see reference below). It was because of Davis's efforts that "Papago Activity's" was designated one of The 20th Century’s 100 Best American Quilts at the 1999 International Quilt Festival in Houston, where more than 55,000 visitors saw it on display. Since then, "Papago Activity's" has traveled to other major American quilting centers, including the National Quilt Museum in Paducah, Kentucky. 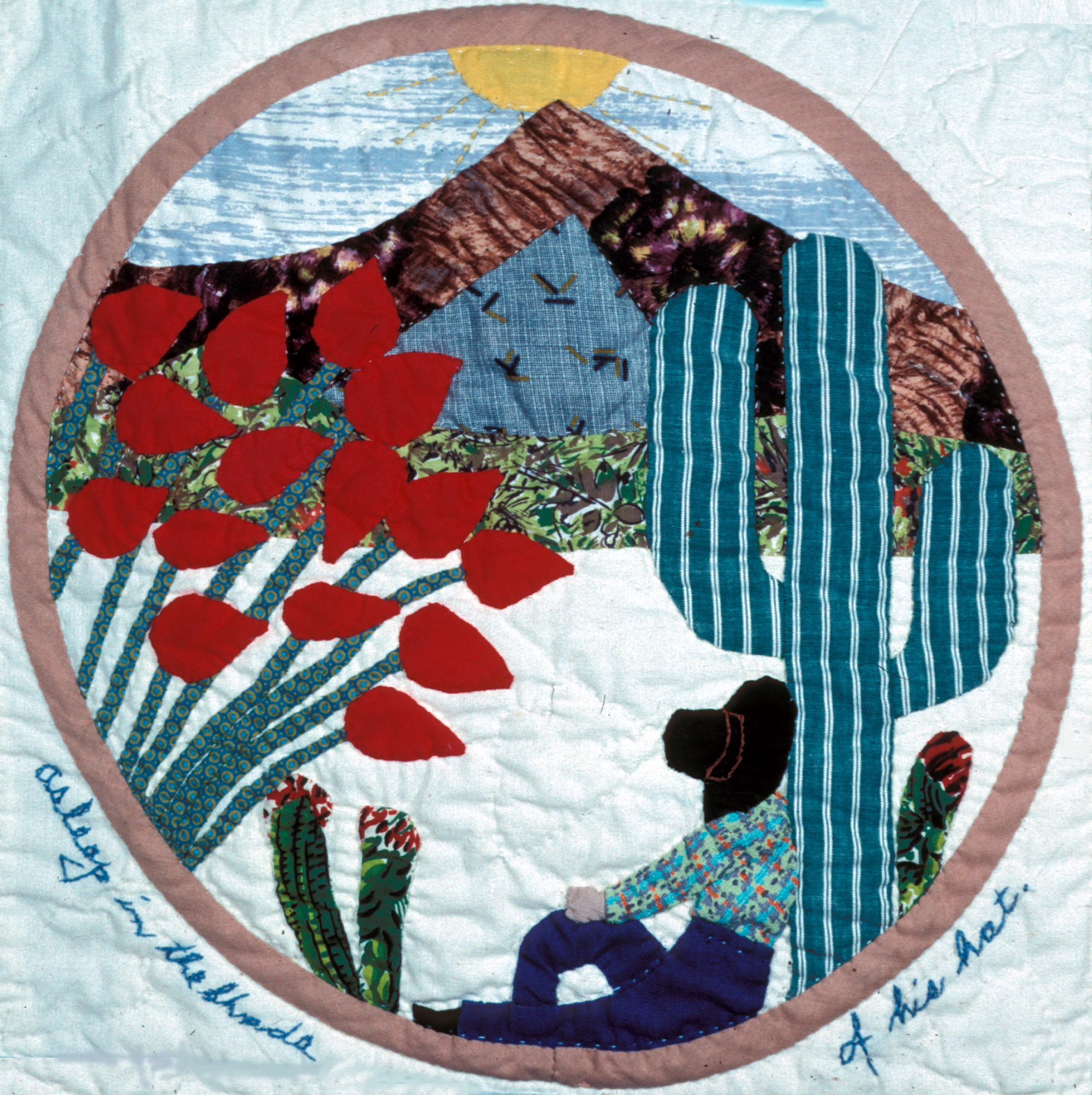 Asleep in the Shade - Row 5 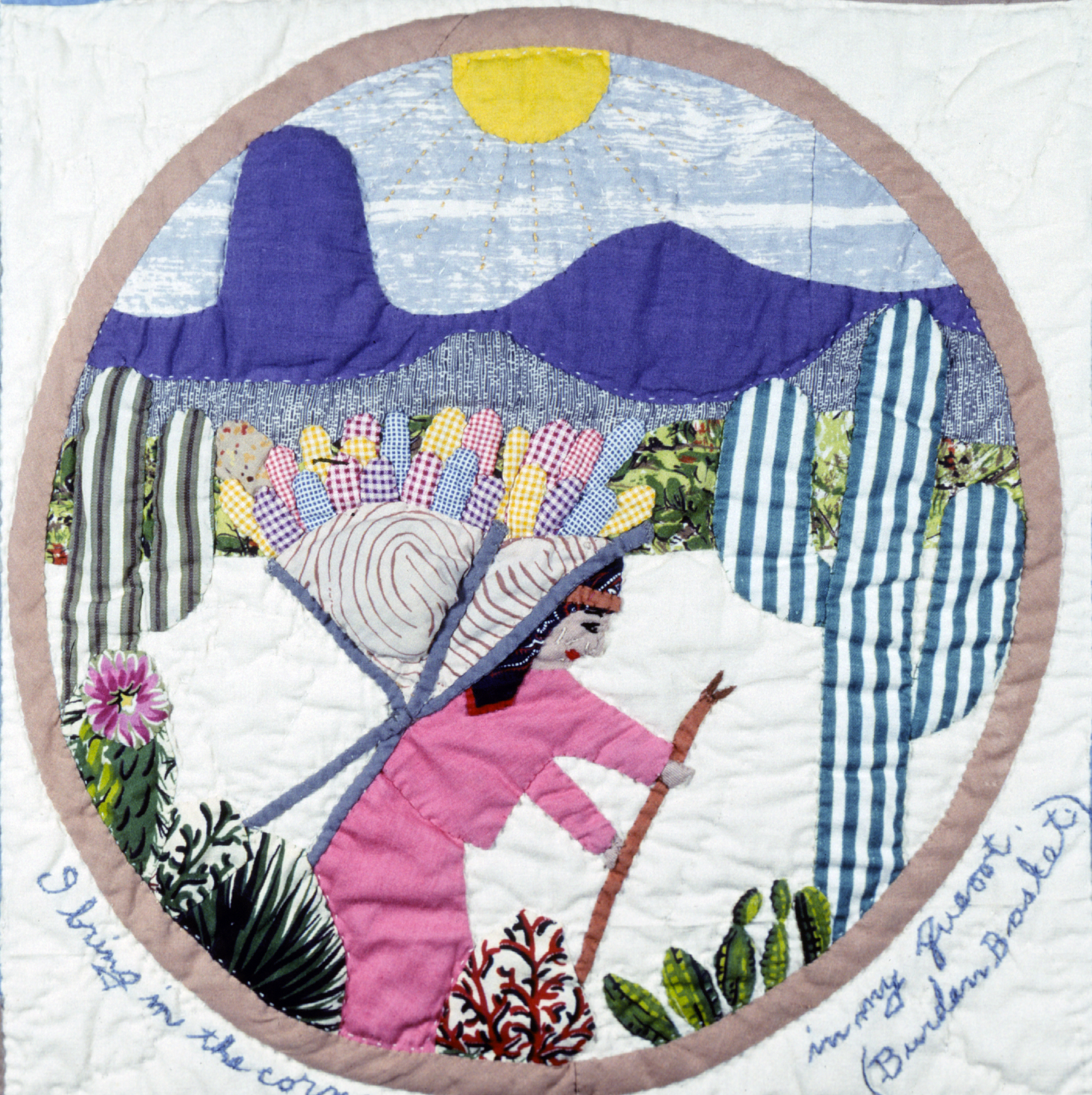 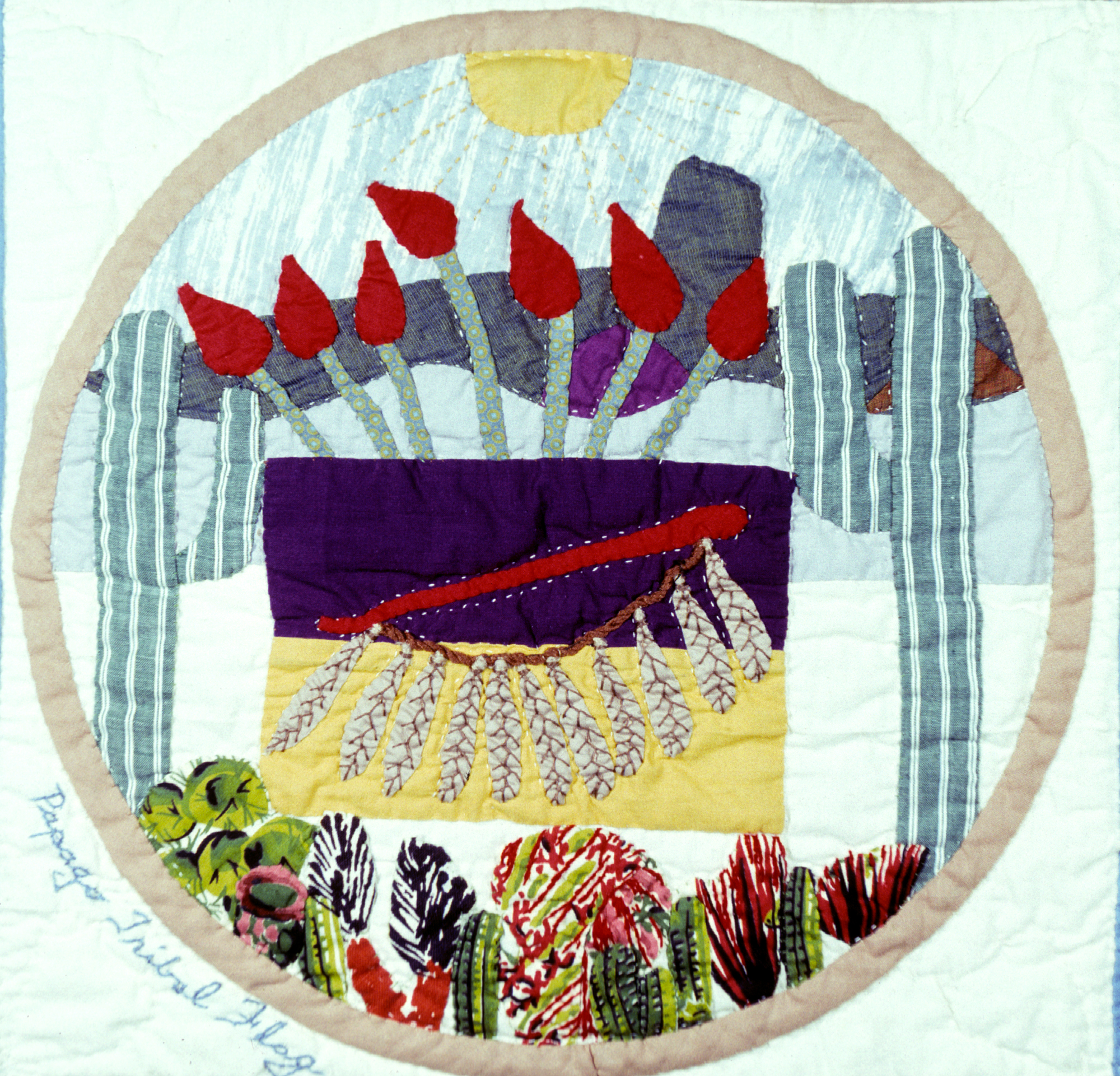 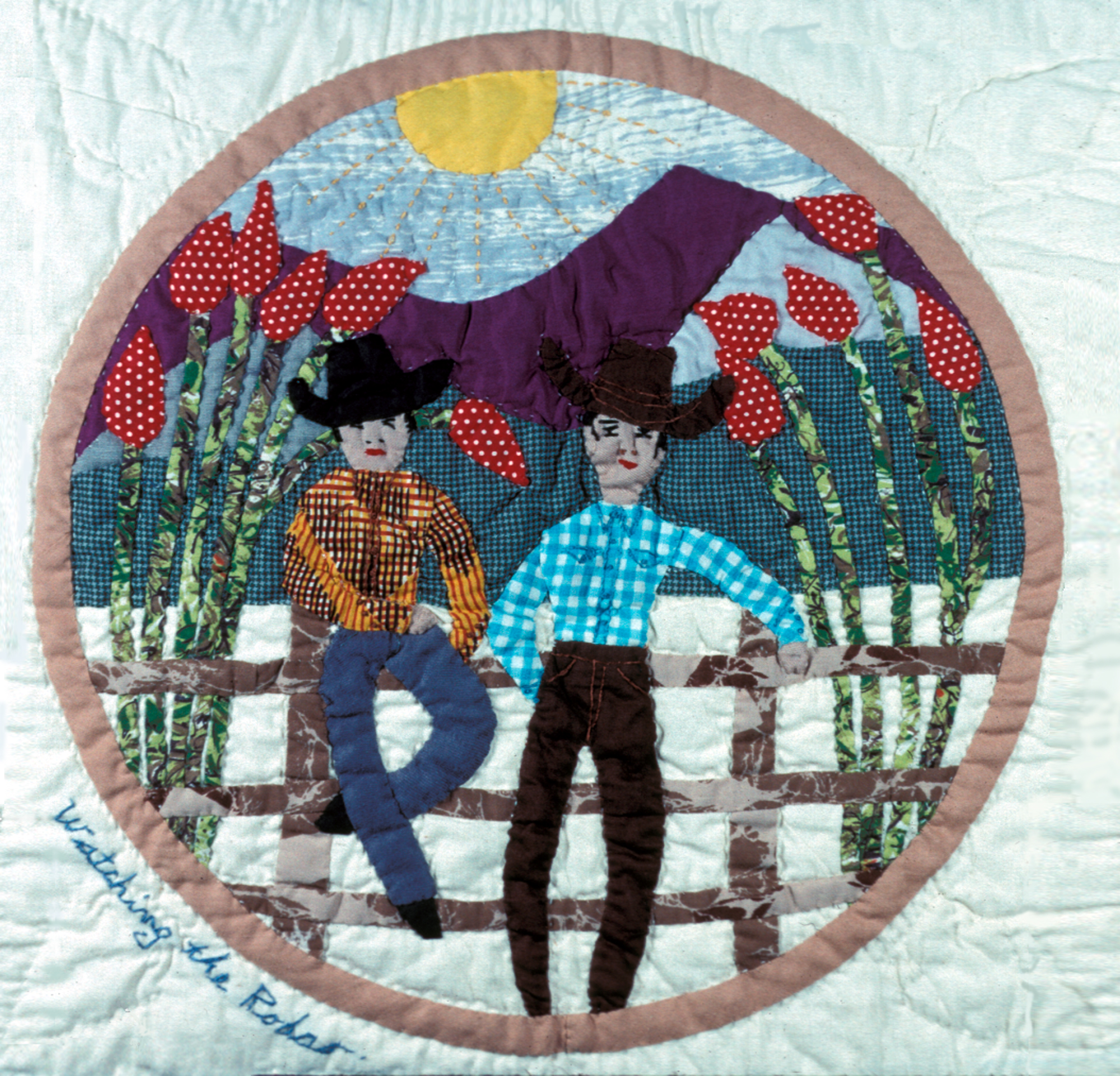 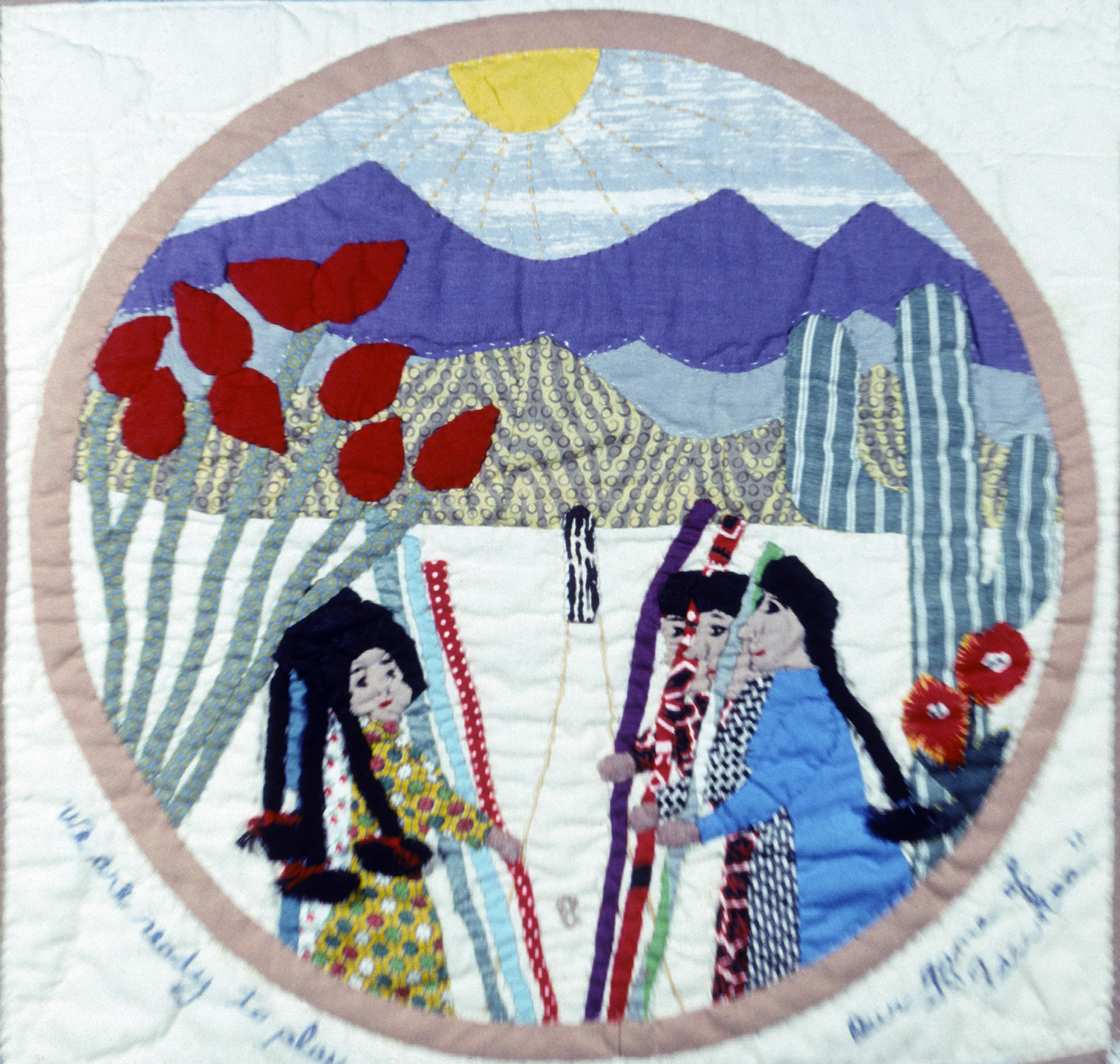 We are Ready to Go - Row 5
Previous Next 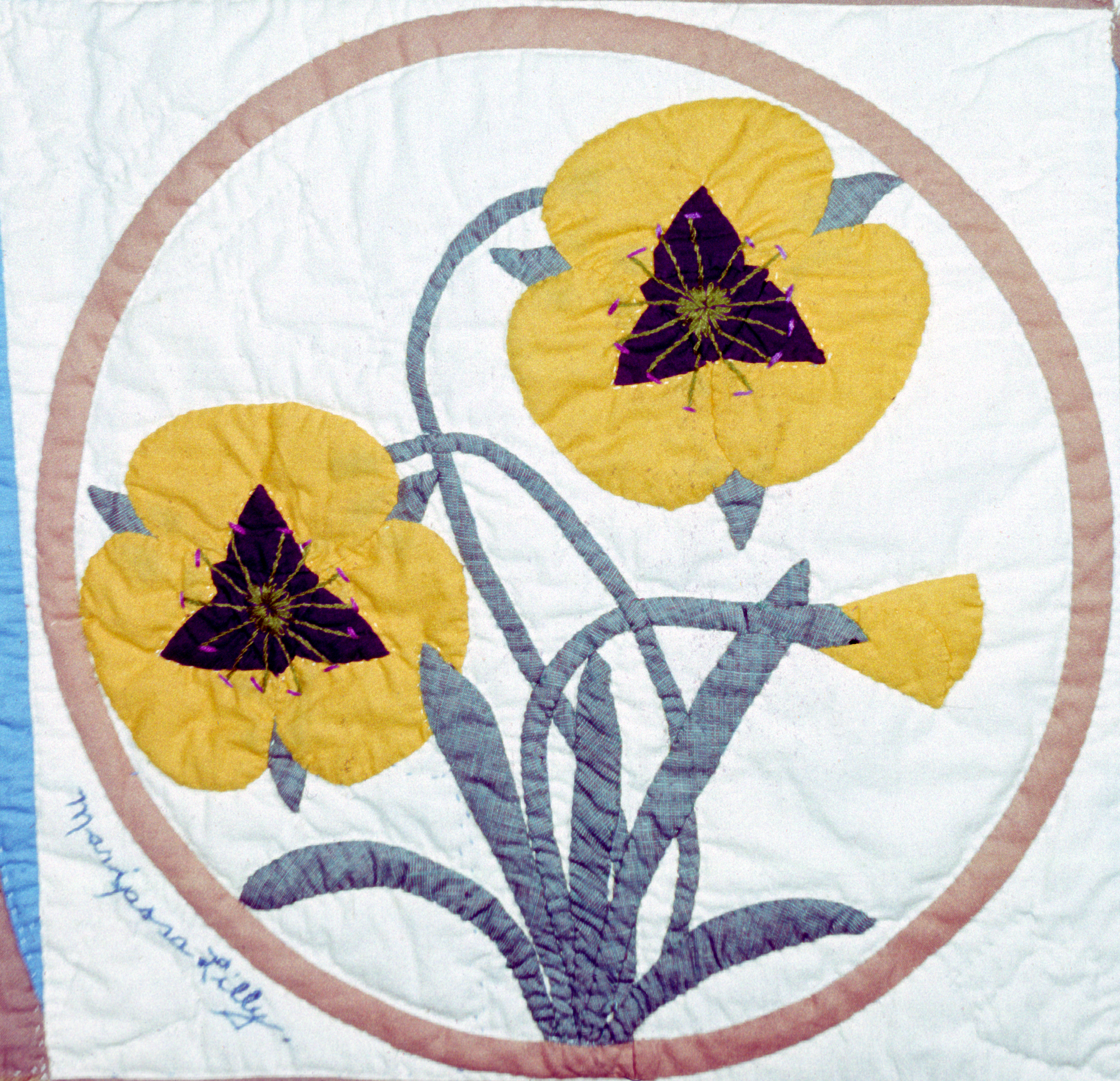 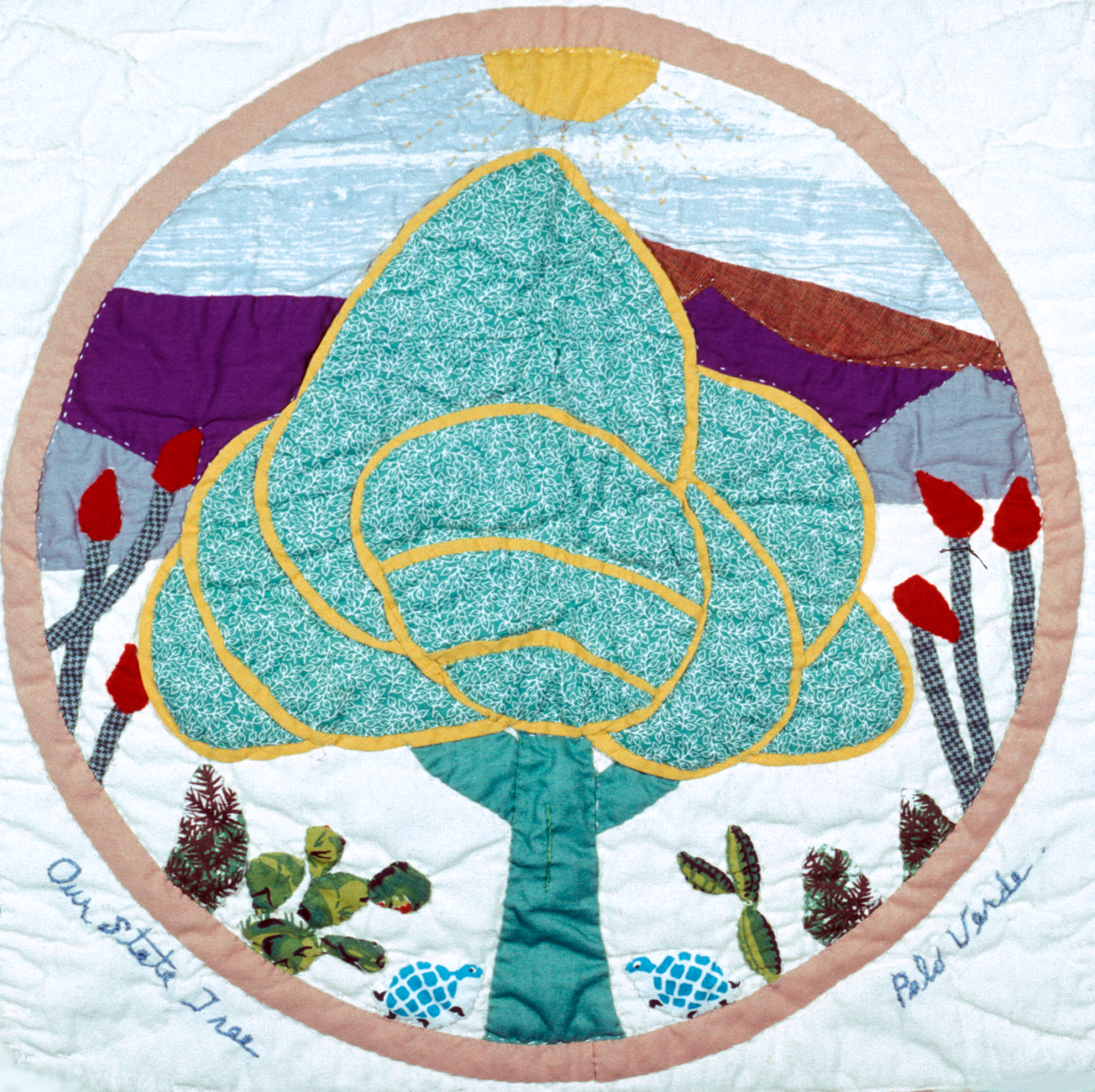 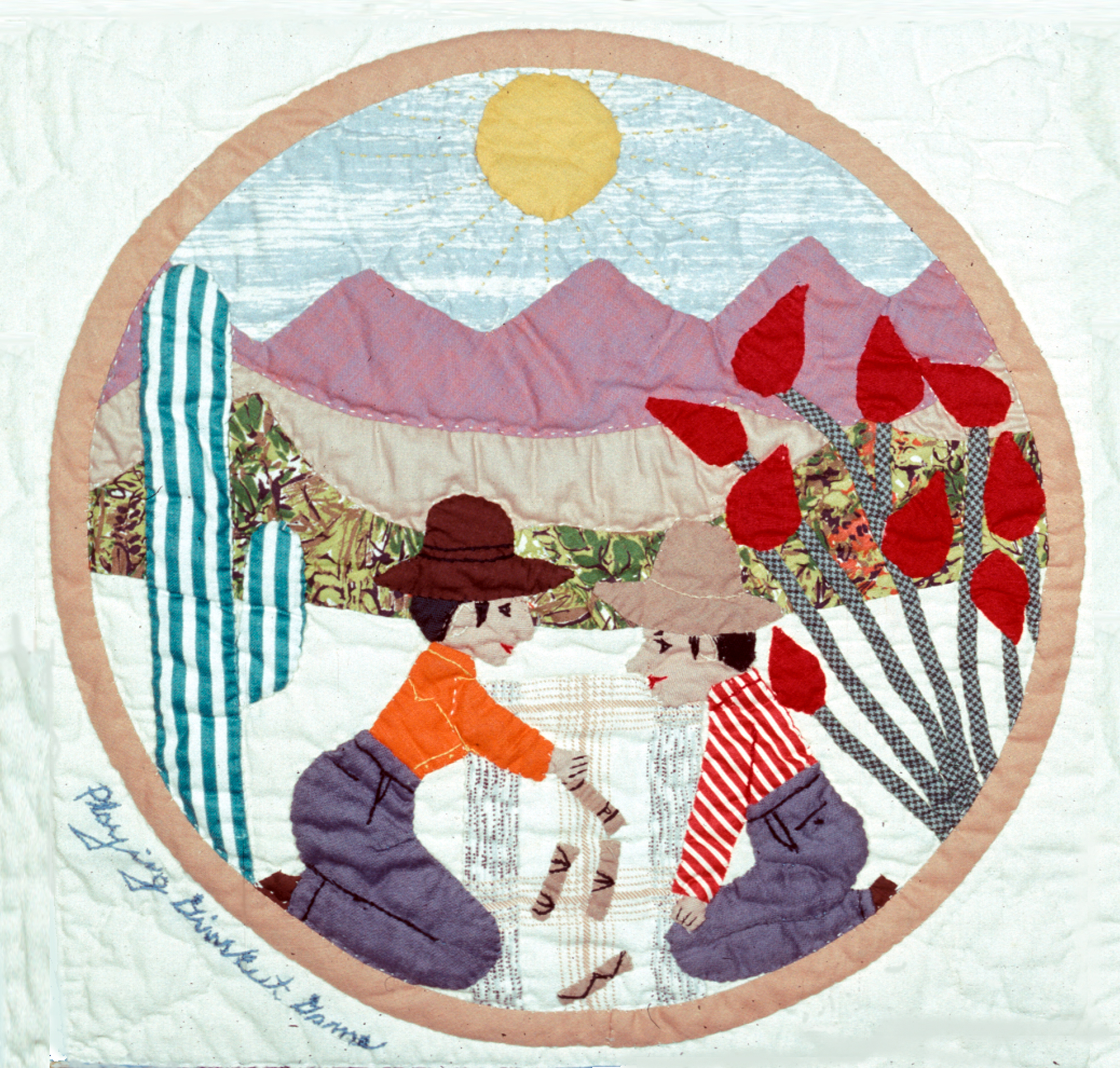 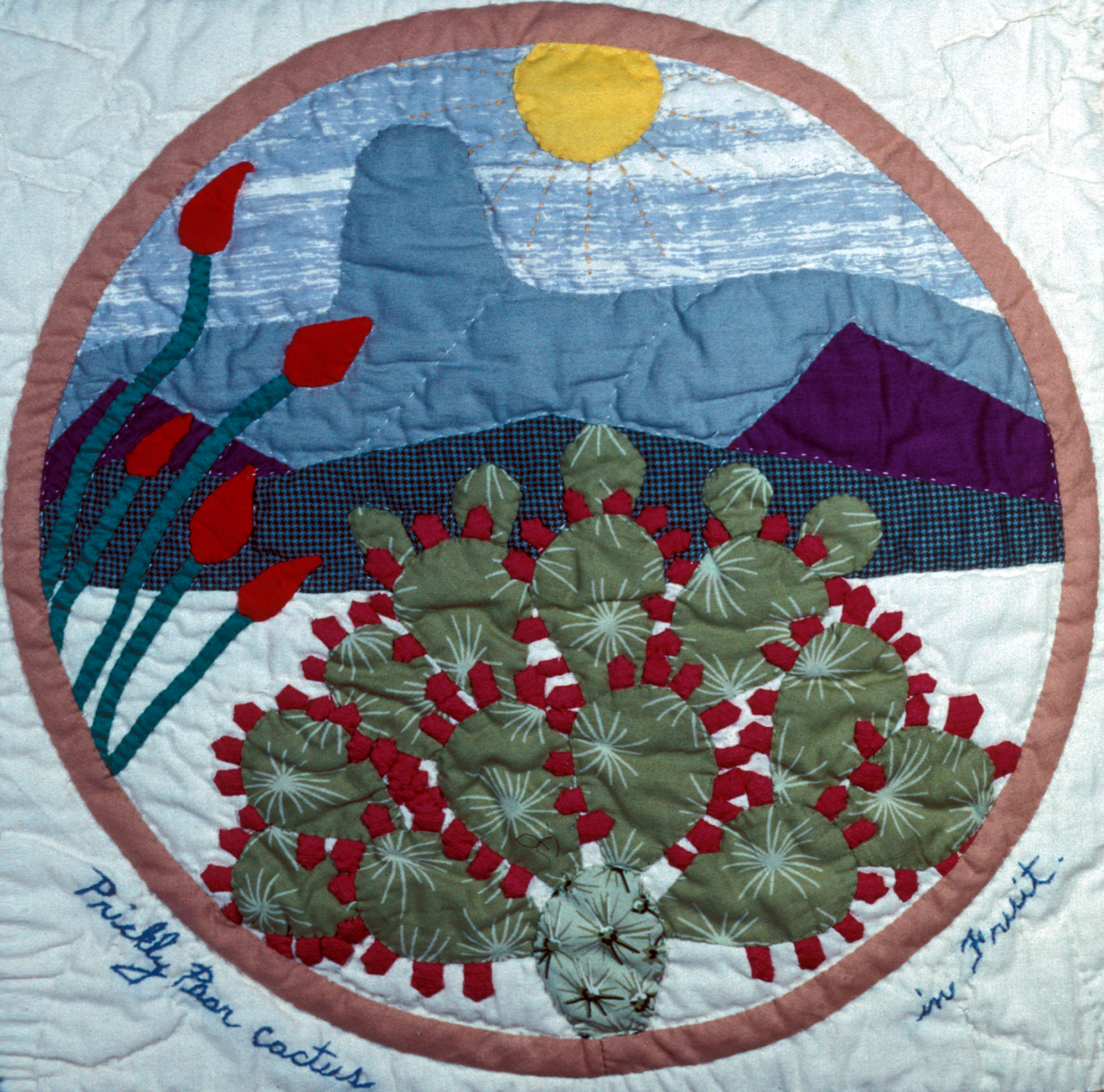 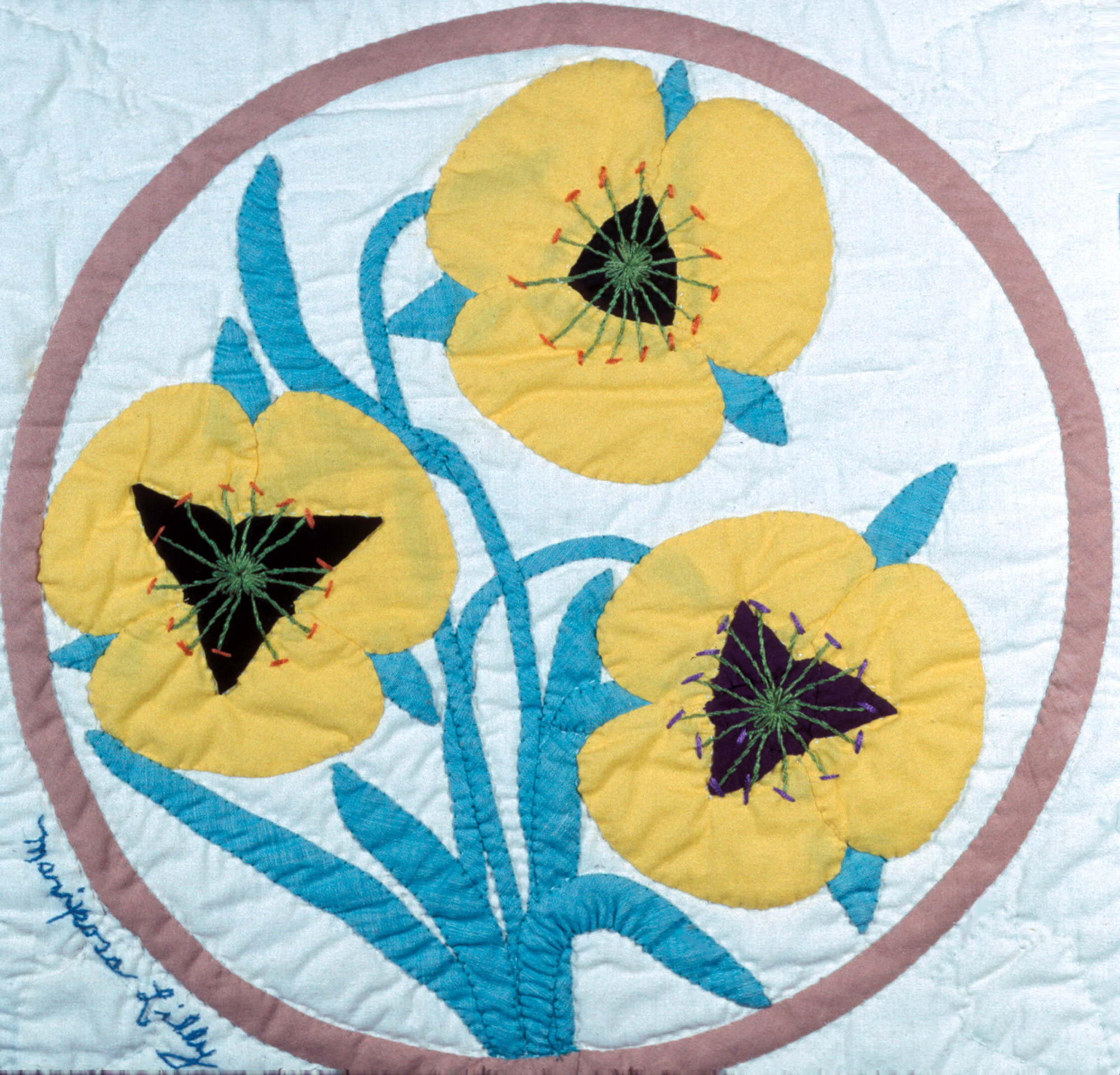