This splendidly bound dictionary was published in 1791 by the Real Academía Española (Spanish Royal Academy), Spain’s official institution responsible for regulating the Spanish language. Founded in 1713 by the Marqués de Villena, Juan Manuel Fernández Pacheco, the Academy was dedicated to “setting the pronunciation and words of the Castilian language in its greatest propriety, elegance, and purity.” It received royal sanction the following year, when King Philip V approved its constitution on October 3, 1714.

Even today Spain has many dialects and languages, but regional differences were considerably more pronounced in earlier times. Royal endorsement of the Academy signaled the clear ascendancy of Castilian following unification of the peninsula’s kingdoms. The Academy’s publications formalized and hastened the process—begun when Antonio de Nebrija presented his Gramática Castellana to Queen Isabella ca. 1495—of standardizing grammar, spelling, and punctuation. Researchers working with Spanish colonial documents observe notable changes in the written language when comparing documents from the Coronado expedition (mid-1500s), for example, with those from Father Kino’s explorations of the Pimería Alta (1687–1711) and Juan Bautista de Anza’s travels to California (mid-1770s).

The Academy published its first dictionary, the Diccionario de Autoridades, in six volumes beginning with A–B in 1726 and ending with S–Z in 1739. It consolidated this set into the single-volume Diccionario de la Lengua Castellana in 1780, printing a second edition in 1783 and a third in 1791. The dictionary has been periodically updated over the years, with its most recent edition—the twenty-first—printed in 1992. All of these editions may be consulted online using the Nuevo Tesoro lexicográfico de la lengua española on the Real Academía Española website.

As an ethnohistorian who reads and translates Spanish colonial documents, I find this rare edition of the Diccionario de la Lengua Castellana interesting for what it represents: an important milestone in the development of a national Spanish language.

In recent years the Academy has moved beyond its nationalistic preoccupation, collaborating with 21 sister organizations in Latin America and other countries where Spanish is spoken to produce a massive new grammar (3 volumes) documenting the richness of the language in all its forms. Included is a linguistic map showing how Spanish grammar and pronunciation vary from region to region. This is a noteworthy change for the Academy, which previously did not acknowledge grammar rules in countries other than Spain. 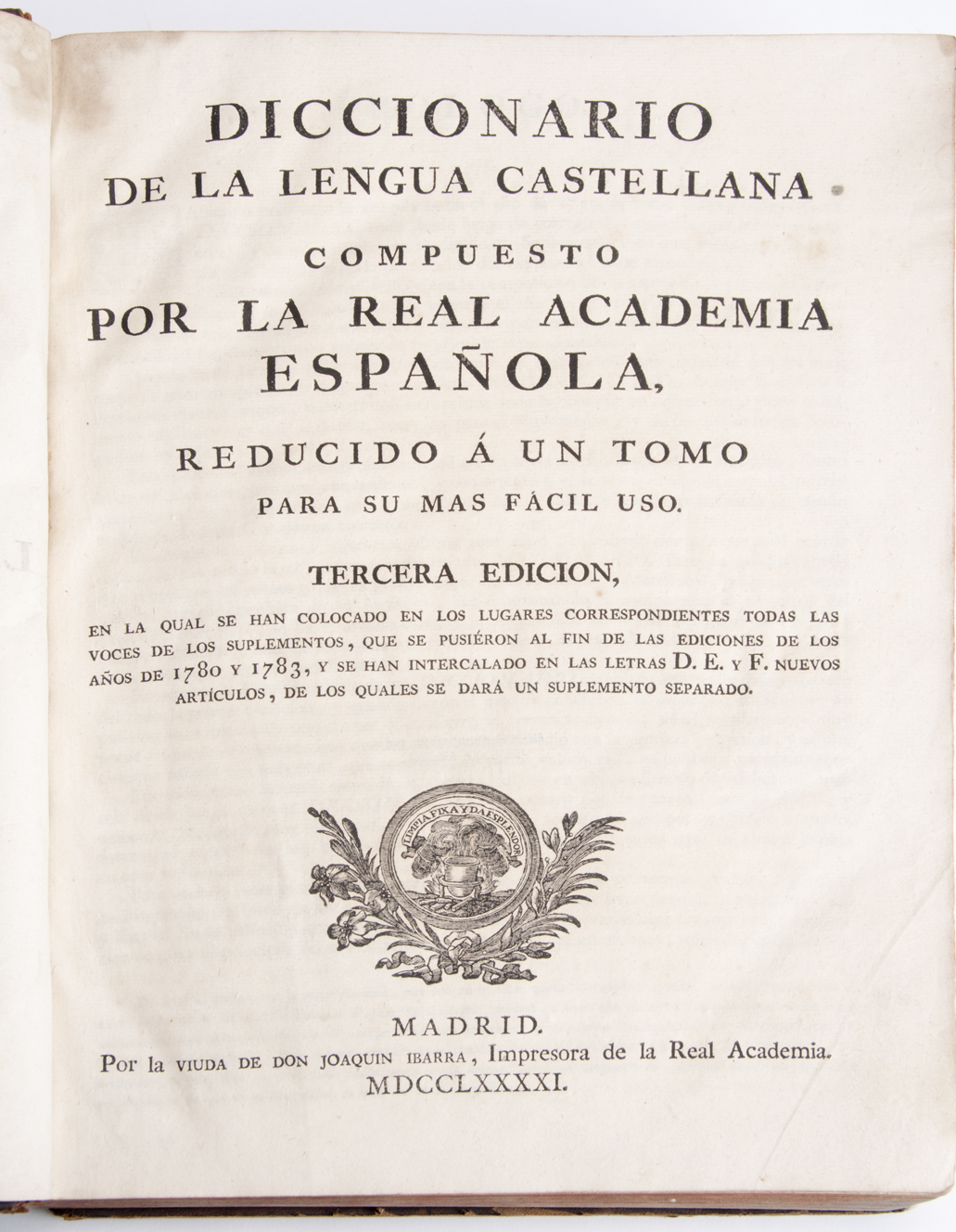 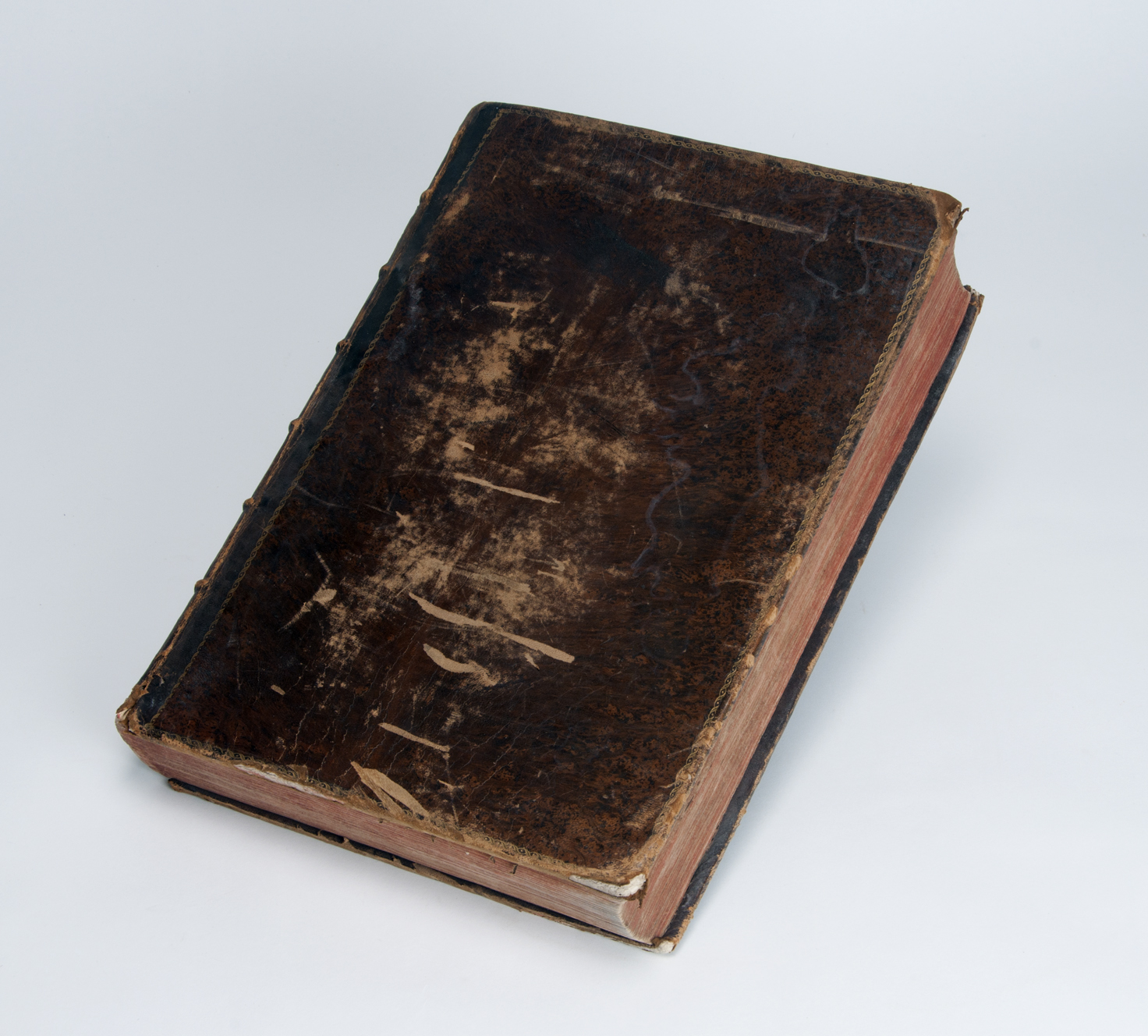 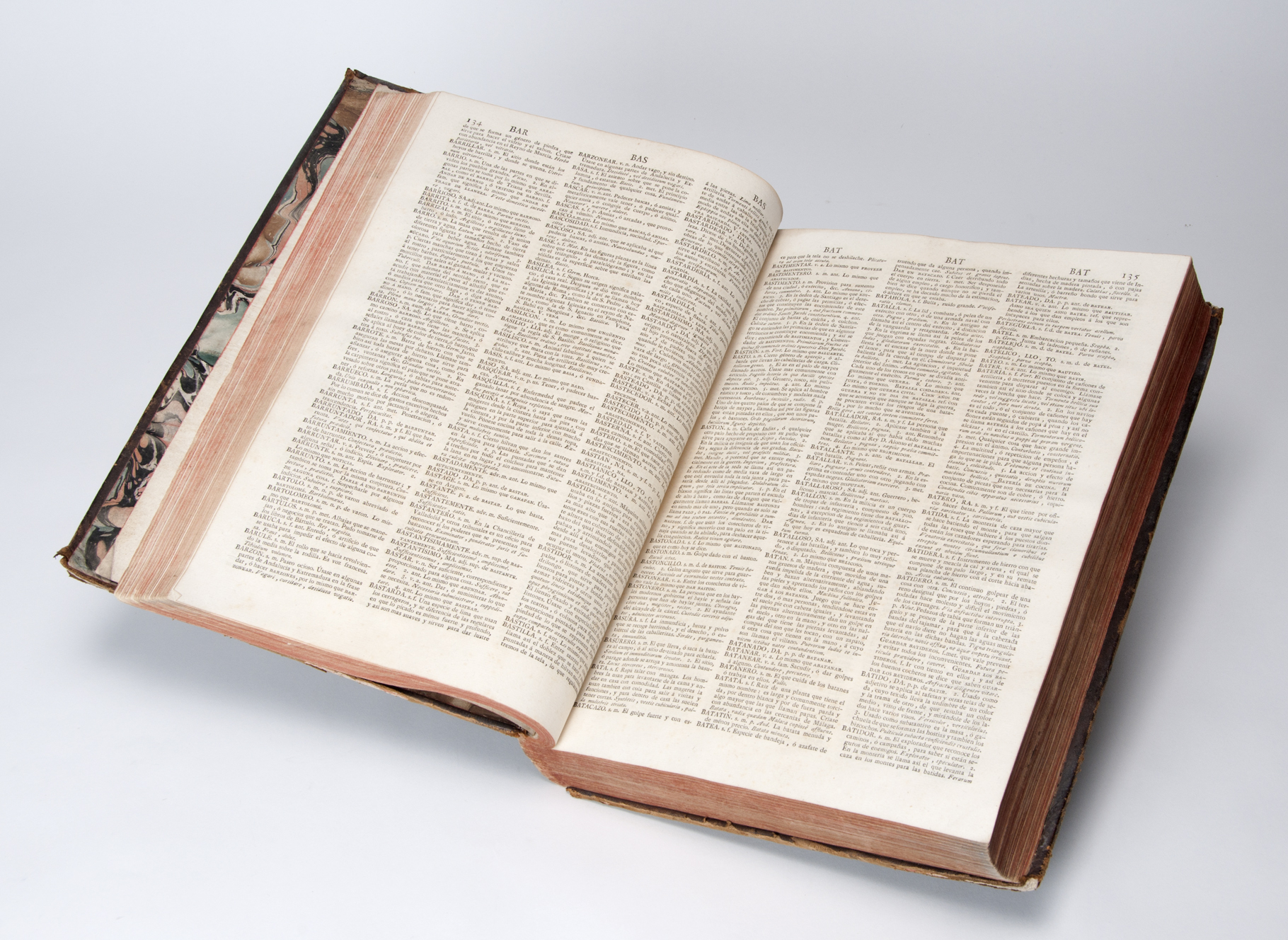 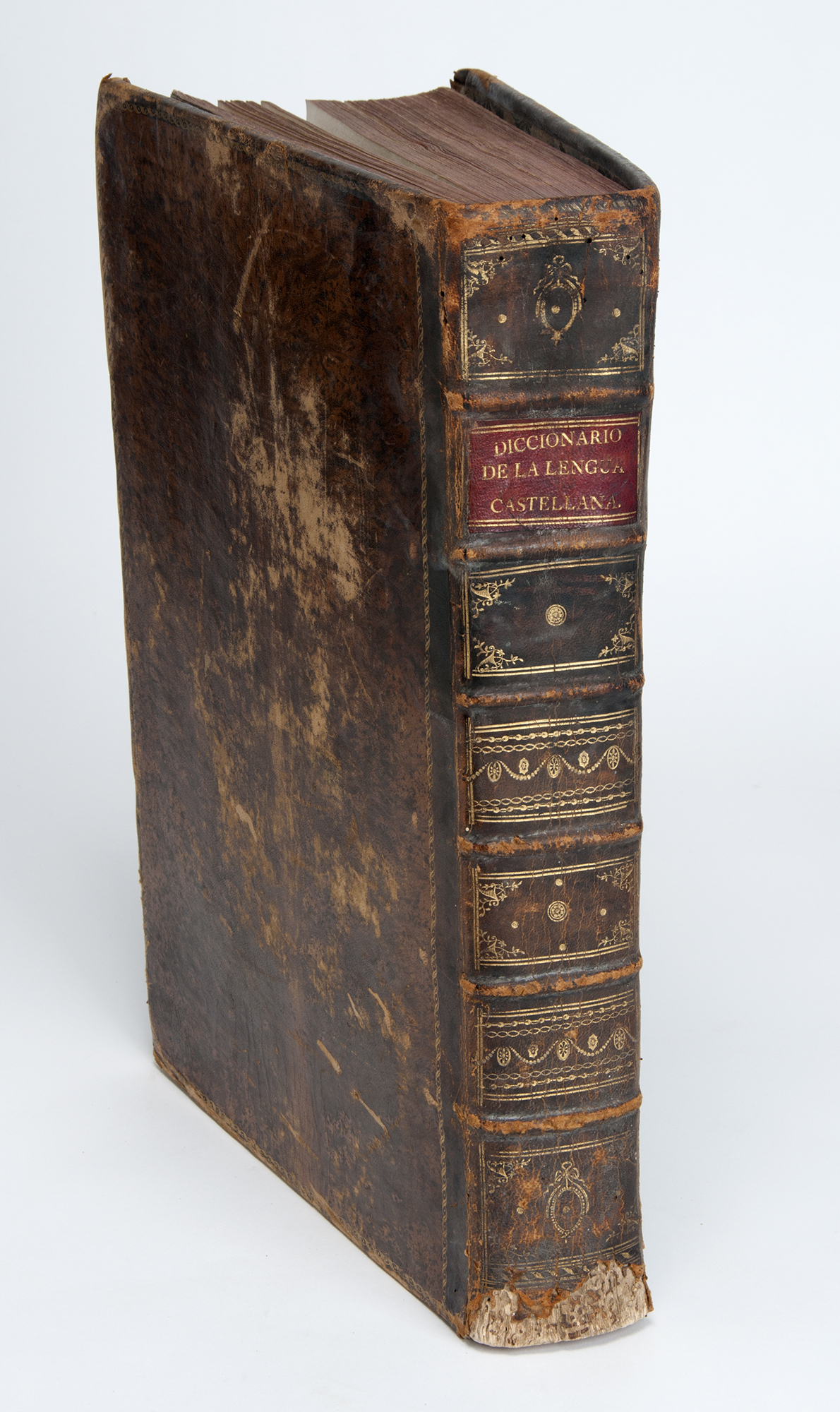 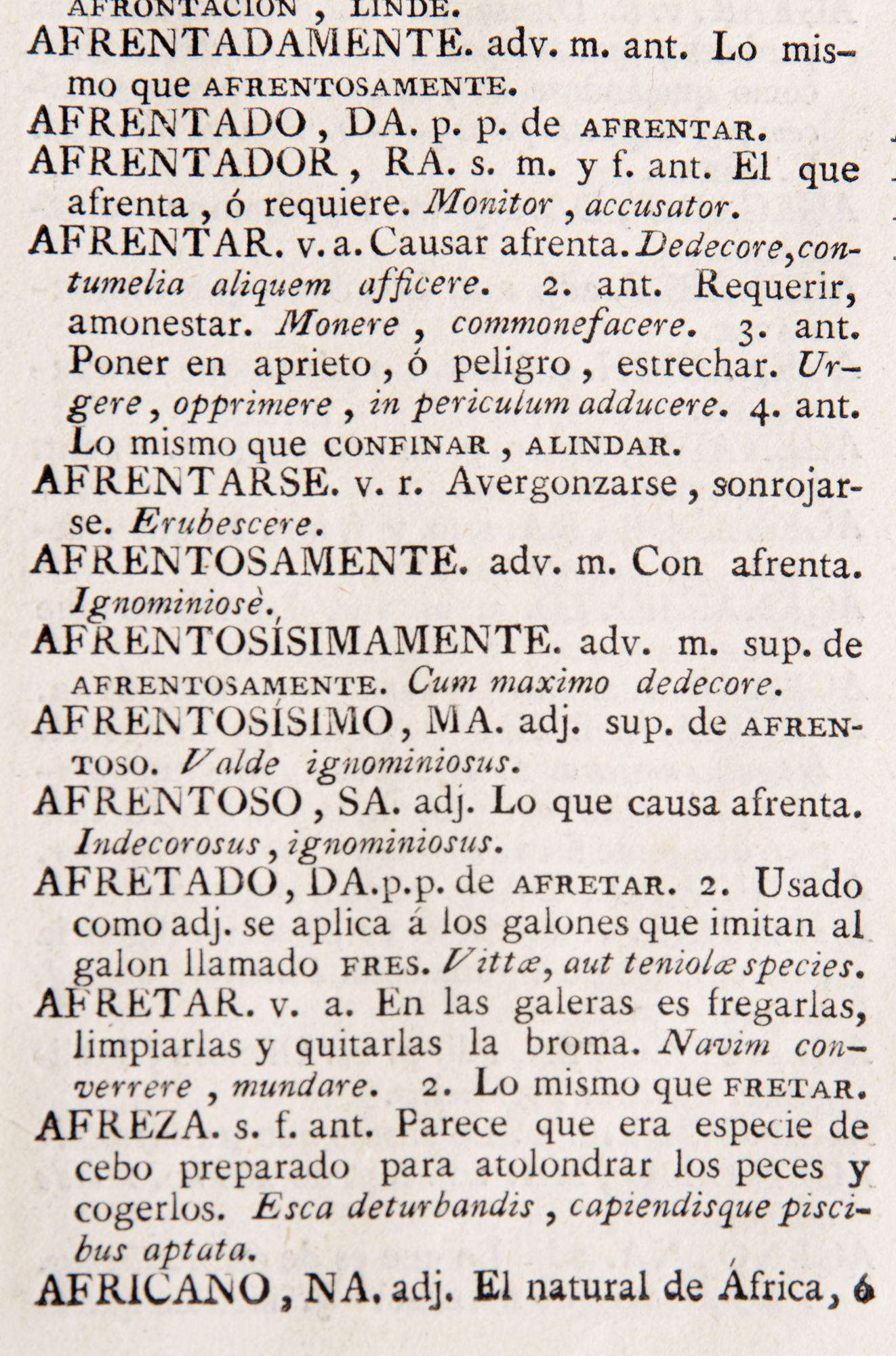