This is one of three ancient ceramic vessels donated to ASM in honor of Michael Anthony Cusanovich, Ph.D. (1942–2010). Dr. Cusanovich joined the University of Arizona in 1969 as an Assistant Professor of chemistry, eventually holding the following positions over his nearly forty years as a faculty member: Professor of Chemistry, Vice President for Research and Graduate Studies, Director of Arizona Research Laboratories, and Regents’ Professor of Biochemistry. As Vice President for Research, Dr. Cusanovich oversaw and was a vigorous supporter of ASM. This object is featured as part of the Curator’s Choice series in order to commemorate Dr. Cusanovich’s passing, in April of 2010, and also because of its ability to communicate key research findings.

Tonto Polychrome is a pottery type within the larger category referred to as Roosevelt Red Ware (or, more informally, “Salado polychromes”). These pottery types first appeared in the mountains of central Arizona during the late 1200s, associated with clues suggesting that they were developed by immigrants from the Kayenta region of far northeastern Arizona.

By the mid- to late 1300s, Tonto Polychrome and other Roosevelt Red Ware types were being produced in nearly every ancient community in the southern US Southwest, replacing local painted pottery traditions such as the red-on-buff and red-on-brown types associated with Hohokam groups. The available evidence suggests that the manufacture of Roosevelt Red Ware remained closely tied to northern immigrants and their descendants, who formed a diasporic community of dispersed but linked enclaves throughout central and southern Arizona, southwestern New Mexico, and northern Sonora and Chihuahua.

Patricia Crown, the researcher who has contributed the most to our understanding of Roosevelt Red Ware, has shown that these pottery types employ a series of painted icons that, among the contemporary tribal peoples of the U.S. Southwest, refer to fertility and moisture. Crown has drawn special attention to what she interprets as stylized horned or plumed serpent heads, imagery she associates with water serpents in Hopi and Zuni religion (Paalölöqangw and Kolowisi, respectively) and with the Mesoamerican deity Quetzalcoatl. She argues that Roosevelt Red Ware spread quickly because its designs expressed an inclusive ideology that supported the integration of immigrants and locals.

This vessel’s painted decoration betrays the heritage of its maker, in that the design is organized using a modification of the “Y-frame layout” unique to the Kayenta pottery tradition (the thick, red lines that divide the design into triangular panels). Some of the specific motifs used, especially the black triangles with F-shaped extensions, have been identified as possible representations of a horned or plumed serpent. 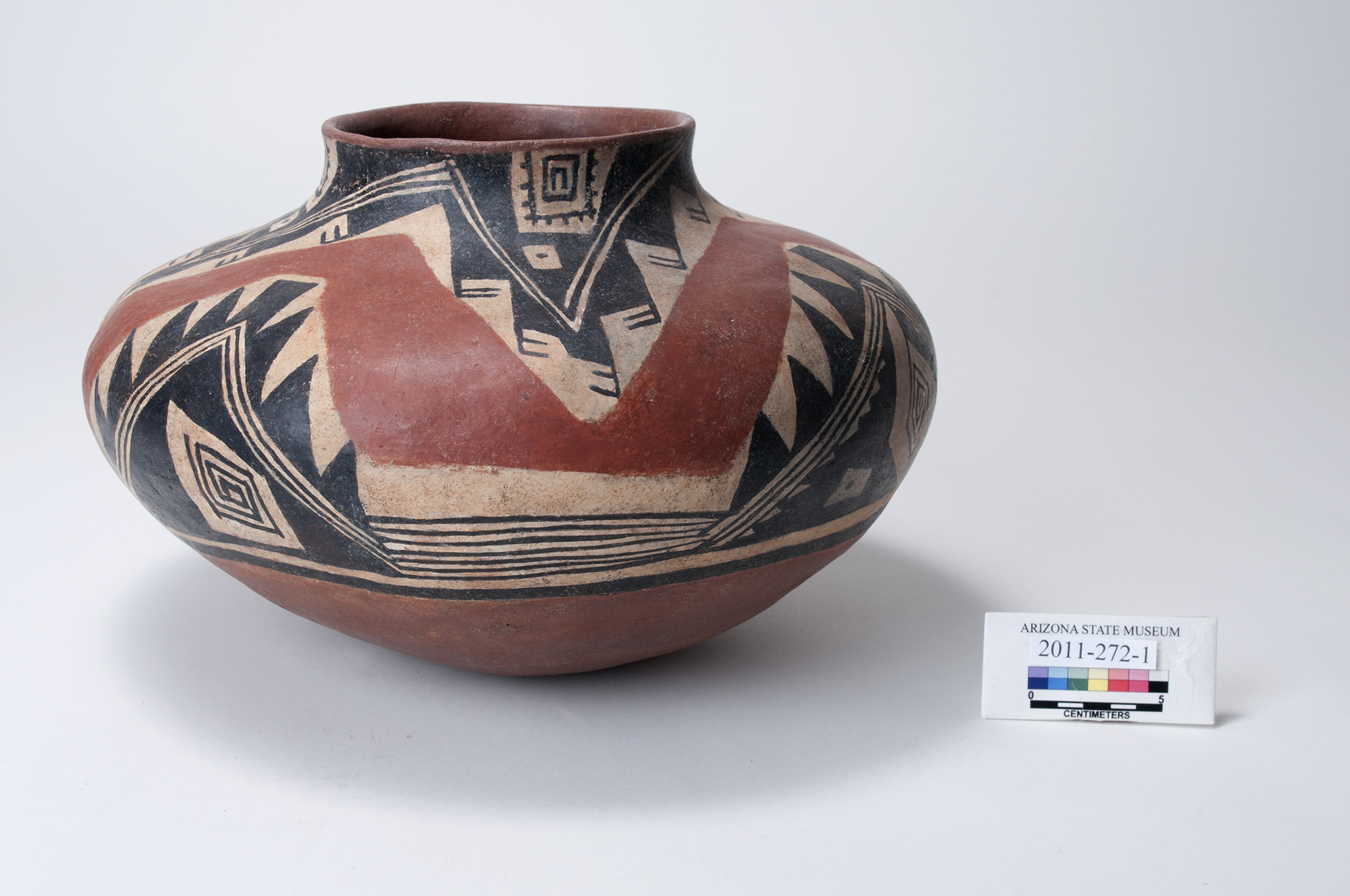 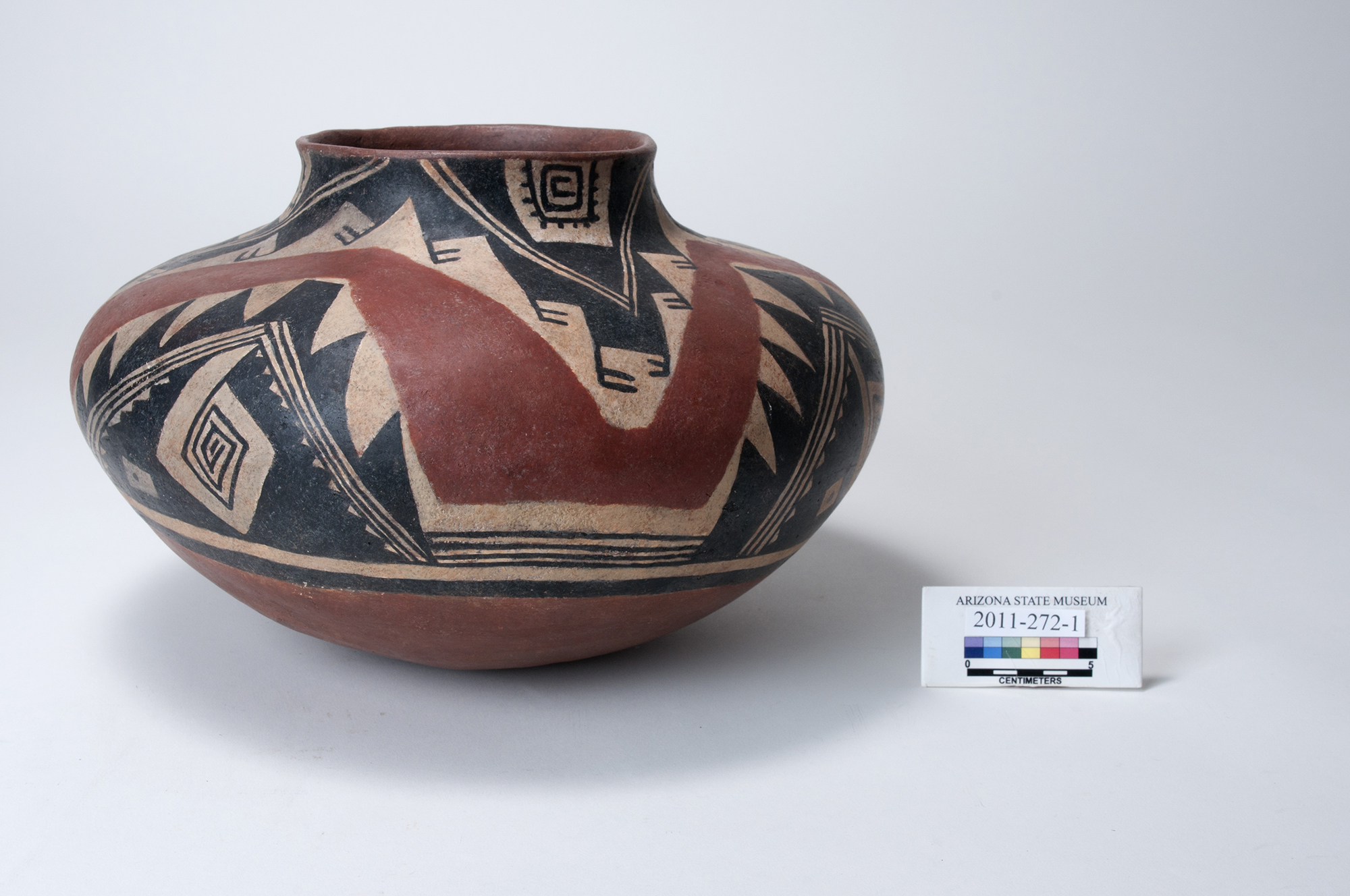 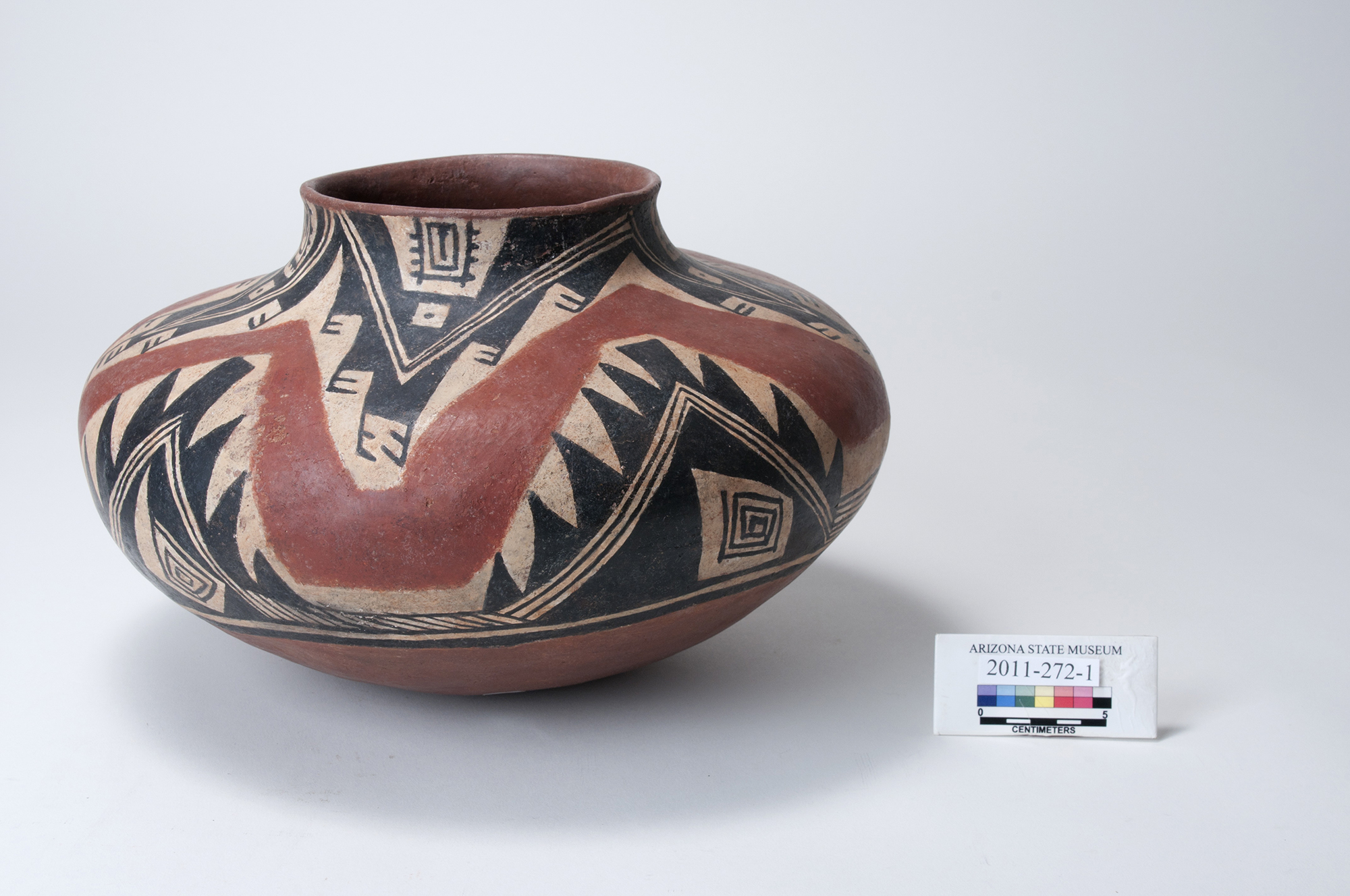 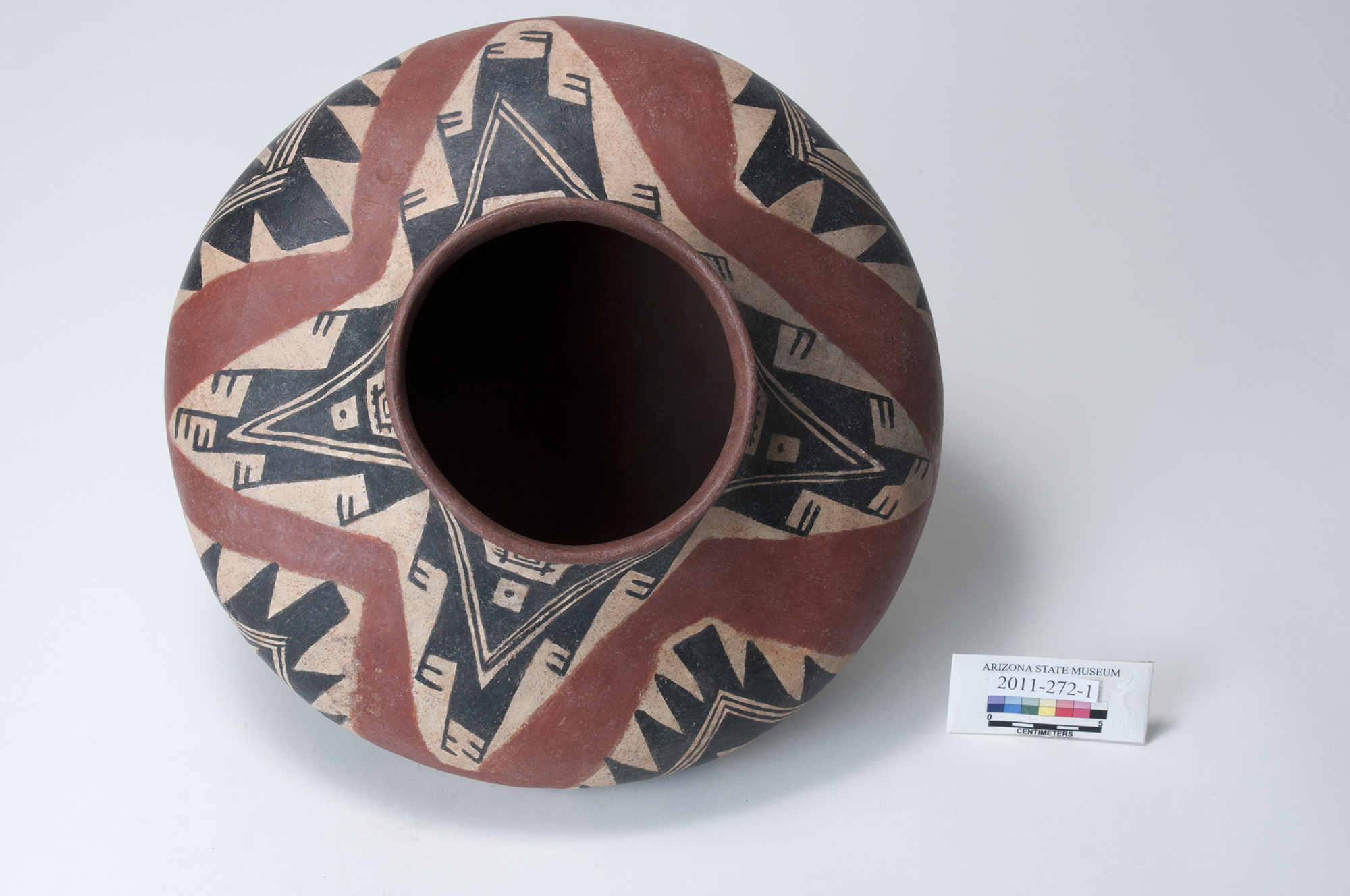 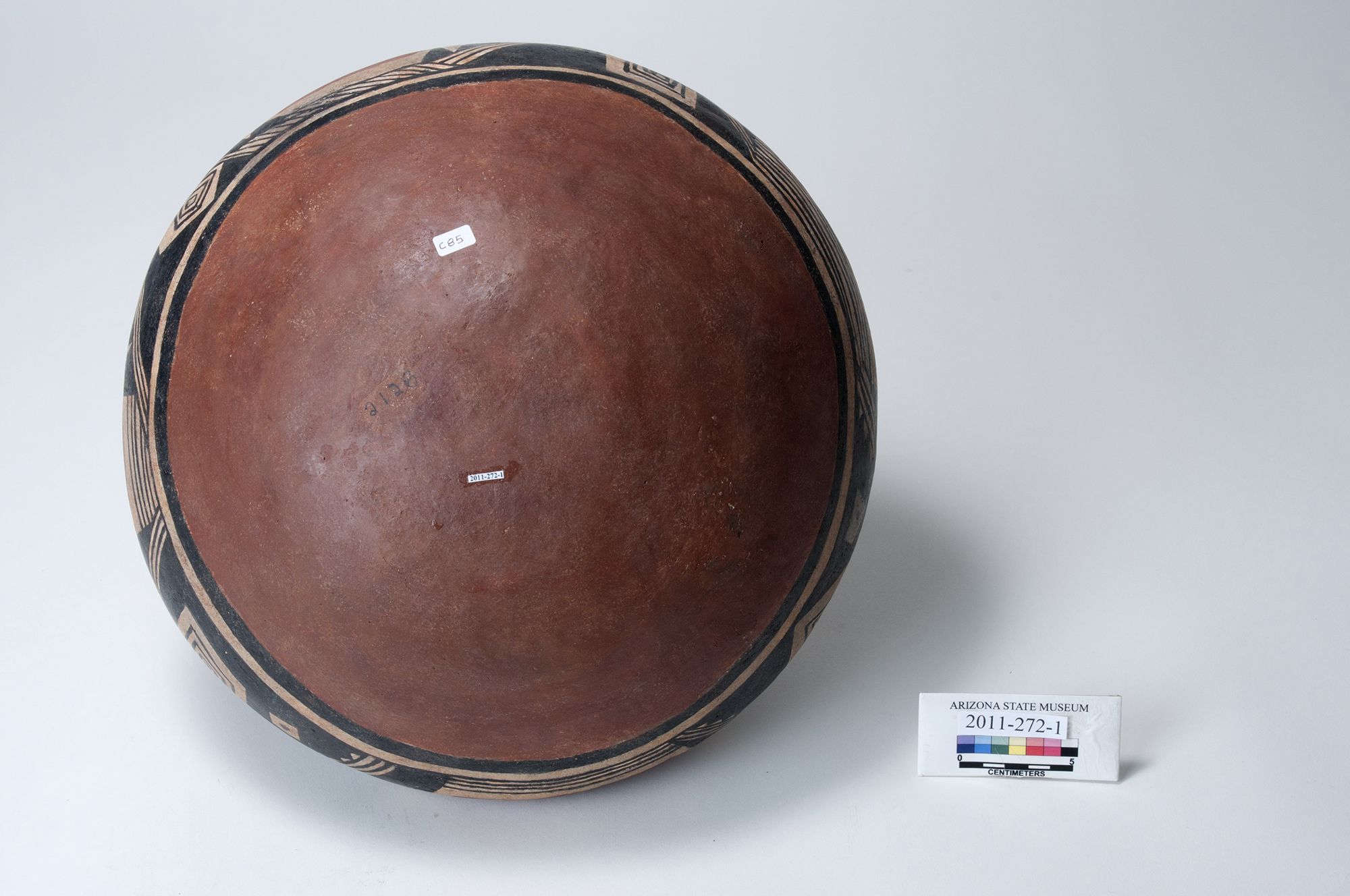